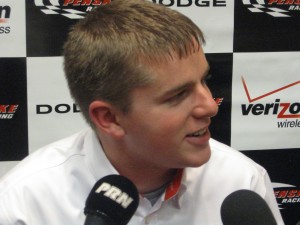 If you look at the 2009 Nationwide final standings, Allgaier finished sixth. Allow me to take the first three Cup drivers out of the equation, and Allgaier would have finished third in the standings.

Kyle Busch won't be running the whole season, and right there is a major plus for Allgaier to fare better in the standings. All Allgaier has to worry about is Carl Edwards and Penske teammate Brad Keselowski. Other then those two drivers, Allgaier is one of the top drivers in Nationwide, and surely this is the year the man will break through and win his share of races.

Allgaier put up some respectable numbers last year, driving the No. 12 Dodge at Penske. The 2009 Raybestos Rookie of The Year earned three top-five and 12 top-10 finishes and started from the pole.

With a year of Nationwide racing under his belt, there's no reason to think that Allgaier doesn't have a shot at winning the opening race of the season on Feb. 13 at Daytona International Speedway. He and Keselowski will be able to use each other as drafting partners. Allgaier has already proven he can handle Daytona, as he finished eighth in his second outing there last July.

Another overlooked positive about Allgaier is his proven ability to bring the car home in one piece. In 35 starts last season, the 2008 ARCA champ finished all but three races.

Every time I see Allgaier race, I see the making of the sport's next Kasey Kahne. Roger Penske is smart and doesn't want to rush greatness. He's knows he's got a proven winner in Allgaier and understands time is on his side when it comes to finding a diamond in the rough.

Dave Exum formerly worked as copy editor/web coordinator for SceneDaily. He also worked for the Boston Herald covering NASCAR for 10 years. He resides in Concord, N.C.