Chevy sticks with Impala - instead of Camaro - for new Nationwide car

Share All sharing options for: Chevy sticks with Impala - instead of Camaro - for new Nationwide car 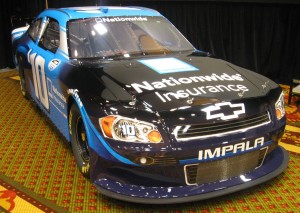 Chevrolet will use the Impala as its new NASCAR Nationwide Series car.

As preparations continue for the 2010 NASCAR Nationwide Series season, a lot of discussion has been about cars that won’t hit the track until July. Those are the "new Nationwide Series" cars that debut at Daytona International Speedway and will run a total of four times this year.

Fans have been energized by the new cars, especially the Ford Mustang and Dodge Challenger, both of which look more like race cars than any of the current vehicles.

Ford officials even went back to the drawing board to create the Mustang nose, and fans have responded well.

All of which begs the question: Why didn’t Chevrolet run a "pony" car? Toyota doesn’t have a version of the pony car, but Chevy has the Camaro. Why not use it?

"We’re very happy with the Impala format," said Pat Suhy, GM Racing NASCAR group manager. "All the things that have been said about why we didn’t do the Camaro are still true and correct. It’s an iconic brand, it’s like a Corvette. You won’t see us do a Corvette race car that doesn’t look like a production Corvette. The same goes for a Camaro."

Suhy said the Camaro brand will race in Grand-Am, where it will look similar to the street version.

Suhy also said Chevrolet didn’t feel any pressure from NASCAR to use the Camaro, even as many fans clamored for a Nationwide Series version.

"NASCAR invited us to look at what we wanted to do from a branding perspective," Suhy said." We certainly, knew because of the cooperative effort that was put into developing the car to the aero specs and the temples, what the other manufacturers were doing. We did a long, hard look at it.

"But at the end of the day, the decision was that we were going to stick with the Impala name and look for other opportunities to race the Camaro."