Dale Earnhardt Jr. says there's no time to be involved in decisions about Danica Patrick

Share All sharing options for: Dale Earnhardt Jr. says there's no time to be involved in decisions about Danica Patrick 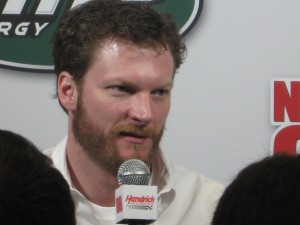 When the decisions are made by the JR Motorsports folks about Nationwide Series driver Danica Patrick’s future in NASCAR, Dale Earnhardt Jr. won’t be among those helping to make the assessment.
Why? Because even though Earnhardt Jr. is a part-owner in his JRM team, he says he’s not involved much with Patrick’s time with the team.
Earnhardt Jr.’s day job at Hendrick Motorsports is more important, so he’ll leave Patrick’s future in the hands of JRM co-owners Kelley Earnhardt and Tony Eury Jr. It helps, we suppose, that they are his sister and cousin, respectively.
"I’ve got great people running all my programs. … I’ve got the right people in place to handle it," Earnhardt Jr. said. "I can’t sit here and do this job and then go tell Tony Jr. and Kelley and all them what to do with Danica. They have to tell me what to do with Danica because they’re watching her, they’re working her. I’m not. I’m doing this job.
"It would be foolish for me to get done with this, run behind the curtain and say, ‘All right, Danica’s running this race with this car. This is her schedule. This is how her progression in the sport’s going to go. When I’m not at the tests, I don’t’ know how fast she is, I don’t know what she knows and doesn’t know.
"Tony Jr.’s the guy that does that. That’s part of the reason why it’s great that he’s an owner as well, so he can make those types of decisions with confidence."
Earnhardt Jr. would like to be involved in Patrick’s career, he said.
"It would be fun to be more involved in the deal," Earnhardt Jr. said. "But I can’t be. This is what I choose to, driving this Cup car. The more you can minimize your distractions, the better."