Lucky 13? Danica Patrick to race in 12 - and possibly 13 - Nationwide races this year

Share All sharing options for: Lucky 13? Danica Patrick to race in 12 - and possibly 13 - Nationwide races this year 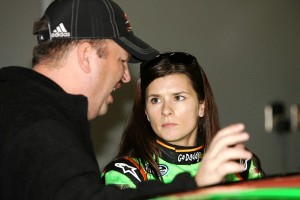 Patrick could still make her NASCAR debut later this month at Daytona International Speedway, where she is entered in the ARCA race next weekend. JRM will determine after the ARCA race whether to enter Patrick in the Camping World 300 Nationwide event at Daytona.

"We want to give Danica the best opportunity to compete at Daytona, and that includes making sure she is 100 percent comfortable in that driver’s seat," JRM co-owner Kelley Earnhardt said in a press release. "The Nationwide race there is perhaps the most competitive race of the year. Once the ARCA race is complete, we will get with Danica and make a decision based on the best interests of her, the team, and our sponsor Go Daddy. I’m extremely pleased with the working relationship between Danica and (crew chief) Tony Eury Jr. They are communicating well and working extremely hard in preparing for this season."

Beyond Daytona, Patrick’s 2010 confirmed races start with the Feb. 20 event at Auto Club Speedway and the Feb. 27 race at Las Vegas Motor Speedway. Patrick will then take four months off to focus on her IndyCar schedule, returning to NASCAR on June 26 at New Hampshire Motor Speedway.

"I’m thrilled to announce our 2010 Nationwide Series schedule," Patrick said in a press release. "Like I’ve said before, we just want to be smart and calculative about this process. The tracks we’ve selected not only compliment the IndyCar schedule, but will give me quality seat time at a variety of facilities."