Who's worse on restarts, Brad Keselowski or Dale Earnhardt Jr.?

Share All sharing options for: Who's worse on restarts, Brad Keselowski or Dale Earnhardt Jr.? 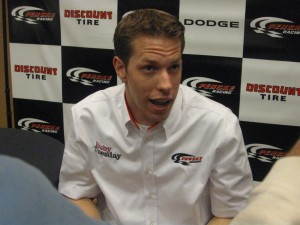 Keselowski has since left the team to join Penske Racing, where he’ll run the full Nationwide and Sprint Cup Series in 2010.

Is Keselowski really that bad on restarts? Yes.

But compared to other drivers, maybe Keselowski isn’t as slow as "Pops" Eury thinks.

"But you know, Dale [Earnhardt] Jr. and I had that discussion," Keselowski said, "and he said, ‘Thank God. You have finally taken that banner away from me. Pops said that about me for five-some years. It annoyed the s--- out of me, and I couldn’t ever say anything. Thank you.’