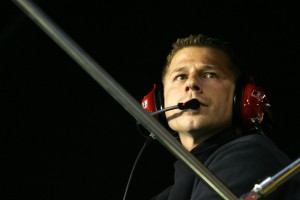 Blickensderfer served as Edwards' crew chief for 19 Nationwide races in 2008, winning seven times and falling short of the championship despite closing the season with nine consecutive top-five finishes.

Blickensderfer most recently served as crew chief for Matt Kenseth in the Sprint Cup Series but was removed last week.

"Drew is a wonderful team builder," team owner Jack Roush said in a press release. "He will bring car-of-tomorrow experience to the Nationwide shop. Carl and Drew have a strong track record together. This is great for Copart and Fastenal. It provides them with a great chance to win a championship. This assignment will task Drew’s potential."

Blickensderfer replaces Mike Kelley, who will become competition director for Roush Fenway’s Nationwide Series operations. Mike Beam, who previously held that title, will move into the role of speedway specialist in the research and development department for all of Roush Fenway Racing.

Kelley will be responsible for car builds in Roush Fenway’s Nationwide program.

"Mike Kelley is a fierce competitor and a very loyal employee," said Roush. "This is a great promotion for him. We will look forward to watching him continue to grow."