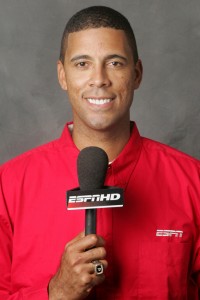 ESPN analyst and NASCAR Nationwide Series team co-owner Brad Daugherty is featured in North Carolina basketball coach Roy Williams’ book, Hard Work: A Life On and Off the Court. Williams and co-author Tim Crothers used Daugherty as an example of that hard work, though it wasn’t always that way.

Daugherty played college ball at UNC and was a No. 1 draft pick in the NBA by the Cleveland Cavaliers. He was a dominant force under the basket, and his work ethic was second-to-none when he played.

But when Daugherty was a boy, he wasn’t always so disciplined. Williams coached Daugherty in T-ball as a youngster and coached Daugherty’s older brothers in high school, but the coach’s only experience with Daugherty on the basketball court was at a youth camp.

"He got mad at me one day as a kid in camp," Daugherty said recently. "We were running some drills, and I was playing around. He got mad at threw me out of the gym. He told me to get out of there, so I went home."

That was that, as far as Daugherty was concerned. He wasn’t to let his parents know about getting kicked out.

"I wasn’t going to tell my dad," Daugherty said. "He’s one of those old-school dads, jack. He was about 6-6, 320 pounds. There was an ass-whooping coming. He’s one of those who told the teacher to beat you, and then when you got home, he’d beat you to death."

So when Daugherty’s father showed up at home after leaving work early the next day, there was hell to pay.

"I didn’t go back to camp the next day, and my dad come home early from work and was like, ‘Why are you home? I thought camp ended at 6 o’clock. I was supposed to pick you up,’" Daugherty said. "I said, ‘Nah, I didn’t go to camp.’ He said, ‘Why didn’t you go to camp?’ I said, ‘Coach Williams threw me out of camp.’"

Uh, oh. For starters, Daugherty said he "got my butt beat" by his dad. And then his father brought Williams over to their house.

"Right there in front of him, he said, ‘I want you to let Brad come back to camp. I didn’t realize he wasn’t showing up. He’s been disciplined for that. I want you to let him come back as a favor to me. If he gets out of line, you let me know, and I’ll handle it,’" Daugherty said.

From that point, Daugherty knew the value of hard work and discipline.

"I went back to camp, and needless to say, he never had another problem out of me," Daugherty said.