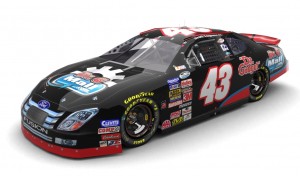 NASHVILLE, Tenn., February 5, 2010 – Baker Curb Racing announced today that the team has reached an agreement with Scott Lagasse Jr. to drive the team’s No. 43 Ford Fusion in the NASCAR Nationwide Series this season. Lagasse Jr. will team up with Greg Biffle at BCR and will make his debut in the DRIVE4COPD 300 at Daytona International Speedway Saturday, February 13th. DrGmall.com will be the primary sponsor on the car for Daytona and will be a sponsor for several races throughout the 2010 season. Additional sponsorship for multiple races has been secured and will be announced at a later date.

Lagasse Jr. registered four top-10 finishes in 21 NASCAR Nationwide Series starts during the 2009 season and was a leading candidate for the Raybestos Rookie of the Year Award during the first half of the season. Since 2005 the St. Augustine, FL native has made 35 career starts in the Nationwide Series and his resume also includes 19 career starts in the NASCAR Camping World Truck Series. From 2006 to 2008 he collected and impressive two wins, five top-five finishes and eight top-10 finishes in the ARCA Re/Max Series in just 14 starts.

Jeff White has been named the crew chief on Lagasse Jr’s No. 43 drgmall.com Ford Fusion. White previously served as the chief engineer on Baker Curb’s No. 27 during the 2008 and 2009 seasons. The Nashville, TN native was the chief engineer at Bobby Hamilton Racing when Bobby Hamilton won the NASCAR Camping World Truck Championship in 2004 and was the crew chief for Ken Schrader in the truck series during the 2007 season.

"I’m extremely excited to be driving for Baker Curb Racing as a teammate to Greg Biffle this season and to represent DRGmall.com," Lagasse Jr. said. "Matt Crews (BCR President) is a terrific leader that has built an organization that produces impressive results for sponsors and the results on the track are equally impressive. Mr. Baker and Mr. Curb have an incredible background in this sport and I know the entire organization will do everything possible to make the No. 43 successful on the track. I worked with Jeff White when I drove some truck races for Bobby Hamilton Racing in 2006 so although I’m coming to a new team I feel that we’ll be on the same page from day one."

"Scott has won at every level throughout his career in racing," Baker Curb Racing president Matt Crews said. "He has won in modifieds, late models, ASA Touring Series, dirt tracks as well as road courses. Last season he proved that he can run in the top 10 in the Nationwide Series on a regular basis and we feel that he is on the verge of competing for wins. Scott knows that being a driver extends beyond the track and he will be a great representative for our new sponsor DrGmall.com and the rest of our sponsor lineup."

"Within a new world of racing, Baker Curb Racing provides the powerful combination of entertainment and sport," said Dave Dettman, AKA Dr. Gadget®. "We feel that this partnership with a NASCAR Nationwide Series team and driver Scott Lagasse Jr. will result in the pinnacle of consumer product integration."