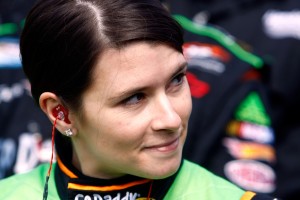 The Danica Patrick Show continues this weekend at Auto Club Speedway as she returns to the seat of the No. 7 JR Motorsports Chevrolet for the NASCAR Nationwide Series Stater Bros. 300.

The IndyCar star crashed in her NASCAR debut at Daytona International Speedway last weekend. But the 2.5-mile Daytona track and the 2-mile California track are completely different, and Patrick continues to face a steep learning curve in stock cars.

"Much like every other time I’ve gotten in the Go Daddy car, it’s new territory," Patrick said. "I don’t know what to expect at Fontana, but I’m learning more and more the longer I’m in the car. JR Motorsports has put a great team behind me in [crew chief] Tony Eury Jr. and all the guys on the Go Daddy team.

"They offer tremendous support and I can always lean on them for help. I’m sure having Daytona under my belt will be helpful, but Fontana is going to be yet again another learning experience."

At least Patrick has that understand of things.

"I have a better feel for the starts and restarts," Patrick said. "Things like getting through the gears, up to speed and the double-file restarts. Fontana is a much different track and race than Daytona, so I’m going in there with the understanding that things are going to be completely different."

One thing Patrick doesn’t have to learn how to deal with is the intense media scrutiny. She’s been under pressure ever since she rose to fame in IndyCars, so dealing with numerous media appearances this week should come as second nature.

"I’m lucky to have a great team on my side," Patrick said. "They make sure that my No. 1 focus is racing, because at the end of the day, racing is the job at hand. If I’m overwhelmed with what is going on outside of the car, I’m not going to be able to focus on what needs to be done inside the car. We try really hard to find a comfortable balance of the two so it’s a win-win for everyone."