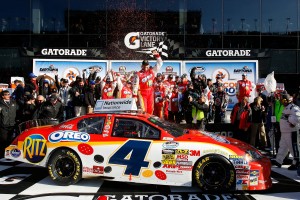 DAYTONA BEACH, FLA. -- Tony Stewart held off a snarling pack of cars on his bumper to win the DRIVE4COPD NASCAR Nationwide Series 300 at Daytona International Speedway on Saturday.

Stewart, who had won four of these races prior to this sunny Saturday, dodged a multitude of sensational wrecks to win his fifth of the last six Nationwide races here.

Carl Edwards roared back to a second-place finish after triggering Dale Earnhardt, Jr.'s upside-down exit from the 120-lap race at the 92nd-lap mark.

Stewart teammate Kevin Harvick was third and Justin Allgaier fourth as the cars zigged and zagged their way to a wild finish.
Rounding out the top 10 were Brian Vickers, Paul Menard, who started the race in last place, Joey Logano, James Buescher, Kasey Kahne and Steve Wallace.

Kyle Busch and Brad Keselowski, who raced up front most of the afternoon, wrecked back in the pack on the last lap.
A 10-car wreck shortly past the halfway point ended Danica Patrick's day, much to her dismay. It was one of those "I didn't have any place to go to miss the wreck" deals.

It all unfolded ahead of her out of turn four when Josh Wise was tapped from behind by Colin Braun, which created a domino effect that eliminated a total of 10 cars, including Patrick, who had been the center of a media blitz for the past 10 days.

Another spectacular accident stopped the race with just 28 laps remaining. This time, it involved most popular driver Earnhardt, who was racing hard in third place when he was clipped from behind by Edwards, after Keselowski nudged him. The contact flipped Earnhardt upside down, and he rolled a couple of times before coming to rest rightside-up.

Harvick received some minor damage in the accident, as did Edwards and Keselowski. Earnhardt, Nemechek and Brendan Gaughan's cars were damaged beyond repair.

Chrissy Wallace spun before the field completed a lap and hit the inside retaining wall, ending her day almost before it began. A little tap in the rear bumper from Menard started her spin which prompted the first caution of the day. It was not to be the last caution.

Just a few after a restart, the caution waved again. Mike Bliss accidentally bumped Trevor Bayne, triggering a multi-car spin. Patrick was almost involved but entered the smoke and came out the other side unscathed. Tony Raines and Braun were not so fortunate.

They sustained some damage in the accident. On the restart at lap 11, it was Harvick, Earnhardt, Jr., Edwards and Logano up front.
At lap 25, Harvick was leading with Earnhardt second. Edwards was third, followed by Logano, Busch, Townley, Stewart, Biffle, Leffler and Kahne. Stewart and Biffle had raced their way into the top 10 after starting the race in the back of the field.

After a round of green flag pit stops at lap 44, Nemechek and Raines led a few laps when everyone but them pitted. Another caution on lap 50 bunched the cars up again. Mike Wallace spun between turns three and four to bring out the yellow flags.
When the race resumed at lap 56, Biffle was the leader with Busch second and Keselowski third.

Patrick had made her way back to 24th spot after handling problems forced her to the rear of the field.