Share All sharing options for: Top 10 countdown: No. 5, Colin Braun 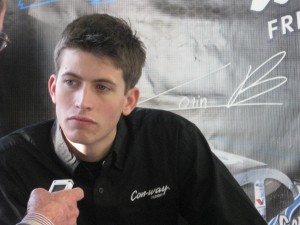 Quick bio: Jack Roush plucked Colin Braun from the sports-car ranks a few years ago, and the young driver is taking another step up the NASCAR ranks by moving full time to the Nationwide Series this year. Braun is loaded with talent, and he’ll clearly learn a lot in 2010.

Why he’ll finish fifth: He’s got more NASCAR experience than his young teammate, Ricky Stenhouse Jr., and should transition easily into the Nationwide Series. Braun will be an immediate threat to win on the road courses and should content on oval tracks, too.

Why he might finish higher: Teammate Carl Edwards is expected to win the Nationwide title this year, but if Braun has the same equipment – and he can quickly adapt to cars from trucks – there’s no reason why Braun can’t challenge Edwards.