Share All sharing options for: Top 10 countdown: No. 7, Kelly Bires 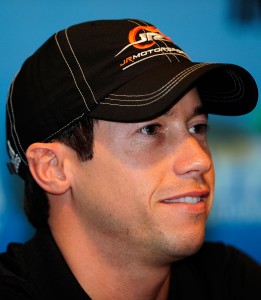 NNSracing.com counts down the 10 days before the start of the 2010 NASCAR Nationwide Series season with our predicted finish of the top 10 drivers. Today, we profile No. 7 Kelly Bires.

Quick bio: Discovered by JTG Racing several years ago, Bires saw his Nationwide Series ride evaporate without sponsorship last year. He did a few one-off rides with a handful of teams, but when he drove for Kevin Harvick Inc. and Braun Racing, Bires ran very well. JR Motorsports hired him to replace Brad Keselowski, so the pressure is on for Bires to live up to high expectations.

Why he’ll finish seventh: Keselowski finished third in the No. 88 last year, so the potential is there for Bires to do well. Does he have the wherewithal to withstand the pressure? We’ll see.

Why he might finish higher: Daytona. Should Bires run the season-opener, instead of Danica Patrick, he should finish higher. But that remains to be seen, as Patrick will make her decision to run after Saturday’s ARCA race.

Why he might finish lower: JRM could pull Bires from the car for Daytona, so what’s to stop the team from doing it again in other races? Plus, the expectations for Bires are extreme, and we need to see if he can stand the pressure.