Share All sharing options for: Boris Said's phone should be busy after Nationwide Series test at Road America 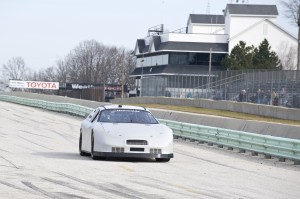 ELKHART LAKE, Wis. - Road-race ace Boris Said usually answers a lot of phone calls in the middle of the NASCAR season, as teams and drivers call him looking for advice about upcoming road races.

Said’s phone no doubt will light up a little earlier this year, as Said conducted the official Nationwide Series test at Road America on Wednesday, driving a Roush Fenway Racing Ford.

"My phone usually gets really busy about May every year, and then after August when road racing is done, nobody calls me anymore," Said said. "… I’m sure I’ll get a lot of calls."

Said will probably tell drivers who call him that the 14-turn, 4.048-mile road course is fast, demanding and difficult on brakes. But he also indicated drivers will love it.

"This race track is very technical," Said said. "It’s very high speed, long straightaways. It’s very tough on the brakes. It’s always been about managing your brakes. For sure, that’s going to be an even bigger issue because these cars are lot heavier."

Said guessed his Ford was hitting 170 mph at the end of Road America’s longest straights, but he wasn’t worried about the high speeds causing safety problems or ruining the race.

"In this race, it’s not really the speed of the car," Said said. "It’s going to be the racing. You’re going to see fender-to-fender, side-by-side racing, cars flying off the road into the gravel. You’re going to see a lot of action here. Most race tracks … you only have a couple places where you can pass. Here, I’d have to count up how many places. You can pass almost every corner but the carousel and the kink."

The kink is the high speed, right-hand Turn 11 that leads on to a long straightaway, and Said loves it.

"This is one of the few tracks in the world where they haven’t kind of put the restrictor plate on it," said said. "Every lap, you come up to the kink, and the hair on your arms is standing straight up. It’s got your attention, you’ve got to respect it. It’s a great corner. I’m glad they haven’t put any chicanes in or things to slow it down like they’ve done at a lot of race tracks around the world."

Said completed numerous laps Wednesday with a data-acquisition system in his car, as NASCAR will take the data gathered from the test to distribute to other Nationwide teams.

Roush Fenway may have a small jump on the competition, but Said has a prior commitment and won’t be driving in the race.

Said also narrated a video of the track while he was driving for others to watch and learn the nuances of the long road course.