Share All sharing options for: Braun Racing's Reed Sorenson begins the road back at Bristol on Saturday 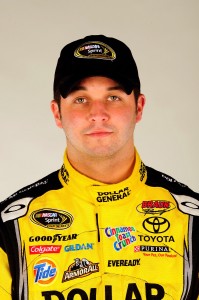 (EDITOR'S NOTE: This is a story written for the Sporting News NASCAR Wire Service.)

Reed Sorenson is only 24 years old, but in the minds of some in NASCAR, he’s already washed up. Why? Because after four full seasons in the Sprint Cup Series, Sorenson finds himself with only a part-time ride in the Nationwide Series.

Sorenson made his Cup debut at age 19, and after three years with Chip Ganassi, he drove for Richard Petty Motorsports in 2009. But he was the odd man out in the RPM/Yates Racing merger, leaving Sorenson without a Cup ride.

But a friendship with Braun Racing owner Todd Braun landed him a seat in that team’s No. 32 Nationwide Toyota, at least part time, and Sorenson will make his season debut in Saturday’s Scotts Turf Builder 300 at Bristol Motor Speedway.

He’s eager to make sure people in NASCAR haven’t forgotten him.

"As a driver, I think I have a lot to prove," Sorenson said earlier in the year. "You want to make sure that people know you’re still here and you still belong here. I think we can do that by winning a few races. … I think that would show a lot of people."

Sorenson is sharing Braun’s No. 32 with Brian Vickers, who finished fifth, eighth and fifth in the season’s first three races. Sorenson will race 23 times in the car, starting with Bristol, where he has one top 10 in seven starts.

"I wish I could run the whole season because it’s only 10 races or so from running the full (35-race) season," Sorenson said. "It’d be fun to run for a championship because I think we could do really well and have a good shot at winning it. But that’s just the way the schedule worked out."

Sorenson figures he can win a couple races this season and be competitive every time out.

"I want to win races," Sorenson said. "I don’t see any reason why we can’t come to the end of the season with a couple wins under our belt. All the tracks we’re going to, I like them all. Hopefully, (crew chief) Trent (Owens) and I, the more we work together, the better we’ll be."

Owens and Sorenson are also paired together for Braun’s part-time Cup effort, though the team failed to qualify at Daytona.

"Next year, who knows what’s going to happen," Sorenson said. "But that’s the way it was this year."