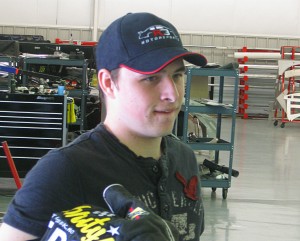 By Coleman Pressley
Special to NNSracing.com

Wow, where do I start. My qualifying run felt pretty good on Saturday morning, but I knew I left a little out there after I was done. There was only a half-second difference between where I qualified and the pole.

So we lined the No. 23 Jasper Engines & Transmissions Chevrolet up in 37th place. I talked with my crew chief (Steve Plattenberger) and dad (Robert Pressley) about everything and we laid out our race strategy for the day. Oh, the one and only NASCAR legend Bobby Allison stopped by before the race to talk with me and offer some advice. That was pretty cool.

Qualifying is one thing, but racing is what we came here for at Bristol. And once we started it wasn’t long before I started to realize just how intense it is in a Nationwide race.

The guys on the R3 Motorsports team really put a great car underneath with their setup and all. We went from 37th to 25th and then to 20th in no time. My first pit stop didn’t go so well as I overshot the box just a bit.

So we had to back up before we could start the stop. I told the guys I wouldn’t do that again, and I didn’t. But we lost seven spots that time, and I hated it happened. The good news we had ourselves on our pit strategy, and it worked out later when the leaders hit pit road, and that left us lined up third for the restart.

I kept myself clean, didn’t get into any trouble or anyone else. Later, we were still in the top 15 when a caution came out. Another car got into the back of me under caution and crunched up the back end pretty good. I have to give credit to the team because they brought me in three times under caution and kept me on the lead lap.

The bad news was we lost a bunch of spots and that left us to make them up, again. And we did by getting back into the top 20, and then top 15 with less than 100 laps to go.

While I was racing that same car that got into me under caution earlier, I touched the lip of the apron a little bit and got loose off Turn 4. The car went right, then left and then I hit the inside wall.

The car was messed up pretty bad and we couldn’t continue because the radiator had a pretty good hole that leaked a lot of water. So we ended up with a DNF, and that is not what I wanted with my debut with this team.

I had a great time out there racing everyone and learned so much during Saturday’s race. I can’t wait to race with this team again and hope to have a much better showing.

Oh, congrats to Justin Allgaier on getting his first Nationwide win. It’s always cool to see someone win their first race.

Thanks for reading this, look forward to talking with you soon – again.