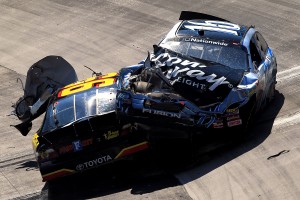 The No. 16 Ford of Colin Braun sits on top of the No. 66 Toyota of Steve Wallace after a crash in the NASCAR Nationwide Series race Saturday at Bristol Motor Speedway. (Photo: Chris McGrath/Getty Images)

The accident, on lap 90, was triggered when Brian Scott seemed to slow entering Turn 1 more than Scott Wimmer expected, and Wimmer punted Scott. As Scott spun at the top of the track, Braun clipped him. Barreling in was Wallace, whose car drove UNDER Braun’s as the two remained stuck together.

A brief fire from Wallace’s car soon went out, and all drivers were OK. But only Scott continued.

"It was weird," Braun said. "I haven’t seen a replay so I didn’t know exactly what happened. But I know the 11 got spun out, and we were right in the middle of it."

Wallace said he didn’t "know what the hell happened."

Scott went behind the wall as his crew made repairs.