Has Bristol victory unleashed the 'monster' in Justin Allgaier?

Share All sharing options for: Has Bristol victory unleashed the 'monster' in Justin Allgaier? 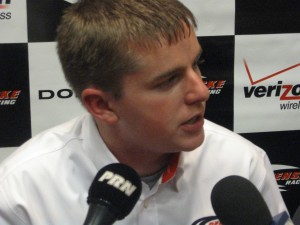 And now, you only need to see him win once to know the future is truly bright for him. That’s the belief of many after Allgaier won his first NASCAR Nationwide Series race last Saturday at Bristol Motor Speedway.

Short in stature but long on talent and possessing a fresh attitude and a bright smile, Allgaier is tailor-made for stardom in NASCAR. We got a brief introduction to Allgaier two years ago when Penske Racing signed him in the middle of what turned out to be a championship season for him in ARCA.

And that season truly was a life-changer for Allgaier.

"The cool thing is a couple months before the whole thing went down at Penske Racing and we won the (ARCA) championship, my dad said, ‘Look, this is probably the last year we’re going to be able to run at the level we’re running at. We’re going to have to cut back,’" Allgaier said.

But the family operation that had taken him to the ARCA title was more than enough. Roger Penske signed Allgaier to a development deal, one that was originally only going to include a part-time Nationwide Series ride in 2009.

Then Verizon Wireless came along and turned that into a full-time job for Penske and Allgaier. Penske Racing had never competed full time in the Nationwide Series, and Chad Walter was hired to bring along the team and Allgaier.

"I remember when I was asked to come over and do this deal, I didn’t even know who the short guy was, to be honest with you," Walter said. "I didn’t know anything about him, I didn’t know what his ARCA background was. … But I heard a lot of good things. And in working with him in the first three, four, five races last year, we really jumped out of the box strong. I knew we had something we could really mold – but not too much."

Walter knew the communication between he and Allgaier needed to improve, and it has. And both driver and crew chief knew they needed to get a little faster in 2010, and that’s all the two have been focused on his Allgaier’s Raybestos Rookie of the Year season last year.

Allgaier came close to winning several races in 2009 but came up short.

"I don’t think frustrating is the right word," Allgaier said. "I think more disappointing. I knew we had a great team last year. I knew Chad and I’s relationship was really coming together. So I think the most part I was really disappointed that we didn’t pull it off."

Four races into 2010, though, Allgaier did pull it off, passing his teammate, Brad Keselowski, late in the Bristol race. And not only did Allgaier beat Keselowski, but he beat a solid field that included several Sprint Cup drivers.

"I really wanted to win at a companion event, where everybody brings their Bristol car and comes to play hardball," Walter said. "That means a lot."

And it may mean a lot more victories for Allgaier.

"The step (at Bristol) is what he needs – the confidence," Penske said. "You’re always close, but if you haven’t won that race, you need that. … I think he’s got a great future with us."

Walter won a race with another young driver back in 2006, and that driver has turned into a NASCAR superstar.

Could Allgaier be a star, like Kyle Busch has become?

"The sky’s the limit for this kid, and we just unleashed a monster," Walter said. "He’s got a little confidence now. That’s a great thing. Look out."