NASCAR: Nationwide Series will be at Road America for 'years to come'

Share All sharing options for: NASCAR: Nationwide Series will be at Road America for 'years to come' 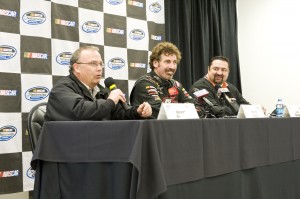 ELKHART LAKE, Wis. - NASCAR will be making its initial trip to Road America this year for a Nationwide Series race, but Director of Research and Development Brett Bodine said he expects the series to be in Elkhart Lake, Wis., for "years to come."

Bodine was part of a press conference during a break in NASCAR’s official test of the 4.048-mile road course on Wednesday. Though NASCAR’s sanctioning agreements are done year-to-year, Bodine was emphatic in the desire to return to Road America beyond 2010.

"I certainly expect it to be," Bodine said. "This is one of those tracks that you want to be at. It’s a cornerstone of American road racing. It’s going to be an event that hopefully will last a long time."

Test driver said Road America is a great place to put on a race weekend, remember the heyday of CART in the early 1990s when crowds would fill the Wisconsin countryside.

"There would be 70 to 80,000 people come," Said said. "Families on their quads, all going around. People eating corn on the cob and brats. There aren’t many races that I can remember like that. It’d be really cool if NASCAR could draw a crowd like that.

"This is a beautiful venue for people who want to pull a camper up and make this a vacation," Balash said.

Wednesday, Said was impressed with the number of fans who showed up for the one-car, one-day test.