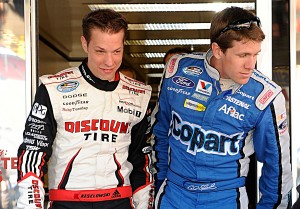 For one, there’s the lingering controversy between Brad Keselowski and Carl Edwards, who met with NASCAR on Saturday morning to talk about the incident in the Sprint Cup race at Atlanta two weeks ago.

And then there’s the re-emergence of a feud between Edwards and Kevin Harvick, which ignited recently when Harvick called Edwards "fake" on a radio program.

All three are racing in Saturday’s Nationwide event, with Keselowski on the pole, Edwards fourth and Harvick 13th.

Keselowski and Edwards have a history, which included the Nationwide race at Memphis last year where Keselowski shoved Edwards out of the way en route to a victory. Then, at Atlanta, the two got together again, sending Edwards into the wall. Late in the race, Edwards, many laps down, spun Keselowski, who flipped on his roof along the frontstretch.

NASCAR parked Edwards and later put him on probation – but levied no more fines.

Edwards and Keselowski are the top two favorites for the Nationwide Series championship, so on Saturday morning, NASCAR got the two drivers – and team owners Jack Roush (Edwards) and Roger Penske (Keselowski) – together for a chat.

"Carl and I have talked before about leaving each other more room, but it seems like when it comes down to it, it never works out," Keselowski said. "The biggest thing to me is incidents are going to happen because we race each other 60-, 70-some times a year. We’re both running well, so we’re going to run by each other.

"We just each have to build up our tolerance for that when things go wrong. … The only way you’re going to be satisfied is if we can back up two weeks and it never happened. Anything besides that is what it is. I’m satisfied where we’re at going forward."

Edwards, too, said he and Keselowski cleared the air.

"Everything went really well," Edwards said. "I think the biggest thing coming out of that meeting is that now, I think, Brad and I understand one another a little better. I think we’re gonna be able to just go forward and go racing, and that’s what this is all about. It was really cool to be able to talk with Jack and Roger and Brad all at once. We laughed. We cried. In the end, I think it’s gonna be good."

NASCAR spokesman Kerry Tharp said it is not the sanctioning body’s policy to talk about the substance of such meetings.

"From our perspective, we want to make sure everyone’s on the same page. We’ve talked to the drivers before, we’ve had several conversations with the owners before – last week. It was the first opportunity at the race track in a competition situation, and we just thought it was a good idea for … everyone to get together and discuss it and move on. I think that’s what we did."

But in the Edwards/Harvick dustup, that doesn’t seem to be the case. The two genuinely seem to dislike each other, and they have a storied past that includes a fight in the Nationwide garage at Charlotte.

"I have absolutely no respect for Kevin Harvick," Edwards told SceneDaily.com. "I think he's a bad person. That's my opinion. I've told him that. We've had our deal before, and his actions through that interaction were so devious and underhanded and cowardly that, it's like, I just have no respect for him."

So far, Harvick and Edwards have avoided confrontation on the track. Could that end today?