Who's that atop the Bristol practice sheet? Yes, it's Danny O'Quinn

Share All sharing options for: Who's that atop the Bristol practice sheet? Yes, it's Danny O'Quinn 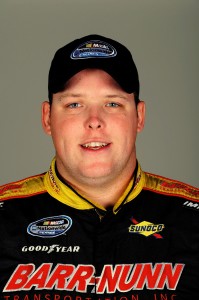 BRISTOL, Tenn. – NASCAR fans probably had to do a double-take when they saw the No. 90 at the top of the chart for the first Nationwide Series practice at Bristol Motor Speedway on Friday.

Just who is driving that car? It’s former Raybestos Rookie of the Year Danny O’Quinn, driving for D’Hondt-Humphrey Motorsports.
That’s the former MSRP Motorsports team that is now co-owned by Randy Humphrey and Eddie D’Hondt. Yes, they are a start-and-park team, but O’Quinn emphasized Friday that they all want to go racing.

"It’s not their goal to sit here and do this every week," O’Quinn said. "Eddie’s been … working really hard trying to put together a few races later in the year. By (being fastest in practice), this is really good for us. We’ve got a team formed up and in shape. When something does to the table, we’re ready to go to the track and race."

The attention can only help, but running fast in practice and being a contender for the pole is a "Catch-22," O’Quinn said.

"You want to go out there and run it for all it’s got (in qualifying), but not being locked in or anything, you’ve still got to hold the reins a little bit," O’Quinn said. "Obviously, a lot of guys probably didn’t mock-up (a qualifying run) there. I still think that would’ve been a good lap with everybody making a run.

"Even today, being fastest in practice, for me, that feels good. I know for Eddie and Randy, that feels good. We all haven’t forgot how to go racing. It is a good thing to go out there and let people know, ‘We’re here,’ and make a little statement. Hopefully, that’ll attract some people who want to get on board and put their name on the quarters and hood."

O’Quinn, from nearby Coeburn, Va., said he’s scheduled to run the No. 90 for 29 races this year, as the team will skip the four races with the new Nationwide Series car, as well as other superspeedway tracks. The team could enter the three road-course races with another driver, O’Quinn said.

Still, O’Quinn has reason to smile.

"Any time you’re running good, it’s always a good sign," O’Quinn said. "We’ve got a good car here. A lot of hard work by these the last week here getting everything ready. We’ve changed a lot of stuff on our cars. We struggled a little bit the first two races. It’s nice to have everything straightened out for a change here."

And for O’Quinn, it’s the perfect place to be fast.

"I’ve been watching races here a long time and I grew up here around the area," O’Quinn said. "Obviously, Bristol’s pretty special to me. Not only is it home, but it is my favorite race track, too. I love coming here."

He only wishes he could stay for the entire race.