And the winner is ... Lee Montgomery?

Share All sharing options for: And the winner is ... Lee Montgomery? 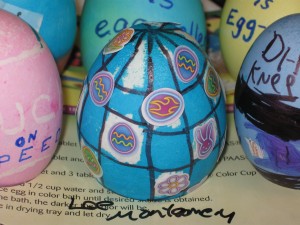 Yes, I "won" the media portion of the Easter Egg Coloring Contest at Nashville Superspeedway. But there's a caveat. Or two.

For starters, I think the judging was fixed. I believe NASCAR's Jenn Powell helped a brother out, as it were. Thanks.

And second, the other entries in the media category were, well, umm, not exactly egg-straordinary. Badoom cha. I'll be here all week.

The driver eggs were much more creative, from Scott Lagasse's John Deere tractor design to Scott Riggs' No. 1 fan egg. But the driver winner was Trevor Bayne, who used some sort of covering to create a Mr. Potato Head with a trophy.

Anyway, this is the first bit of "news" from Nashville. Well, not really. But it was fun anyway.