Bayne's World: Richmond should be a good place to turn momentum around

Share All sharing options for: Bayne's World: Richmond should be a good place to turn momentum around 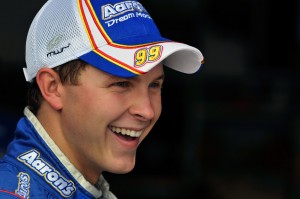 By Trevor Bayne
Special to NNSracing.com

(EDITOR’S NOTE: NNSracing.com hopes to provide readers behind-the-scenes coverage, and part of that will be blogs from Nationwide Series drivers. Today, we present the thoughts of Diamond-Waltrip Racing driver Trevor Bayne.)

If I had to choose whether our season has been better than expected, about the same as expected or worse than expected, I’d have to say worse than I expected. But it’s not due to things that we’ve done, it’s due to things that have happened, circumstances ion the track. It’s not anything that we can really do. If we were a little bit faster, maybe we could’ve avoided some of the things, but … Daytona, nothing we could do; Bristol, nothing really we could do when we got wrecked by a lapped car running fifth; Phoenix, there was a big wad-up on the restart.

Everything’s that’s happened that have brought us back in the points to where we are is none of our doing. I think I expected us to maybe run top-10 a little more than we have. But I know that’s coming, and it’s all a learning curve. I have to understand that the series that I’ve raced before, there’s four or five or 10 competitive cars. Not 25 competitive cars like in the Nationwide Series. The level of competition now, I’m racing against the best of the best, and I have to understand that and know that I’m going to get better too.

It’s not all about making the car the best it is, it’s not all about having the best spotter, it’s about getting better as a whole. The driver, the team, everybody has to get better at this level. And we’re going to work on it harder than ever have. That’s what it’s going to take. I know my crew is working harder than they ever have, I know that we have more support than we’ve ever had. And as a driver, I’m going to start studying – almost like you see football players that are students of their sport. That’s what we have to do in racing now.

You get so wrapped up in making the car faster that sometimes you forget that you’ve got to get better yourself. I had an opportunity to work with Martin Truex Jr. at a test (Monday), and he worked with me a lot and taught me a lot about momentum of these Nationwide cars. Now we’re going to Richmond, and hopefully we can get some momentum going here and get something rolling for the team. That’s all it’s going to take is a little shove. It’s easy to get down when these things are going on, but for our team, I think it’s going to be just as easy to get up if we get a couple good runs., That’s what we’re looking for.

I’ve never really gotten down. Sometimes I wonder what in the world we can do to get better. How can you be the best that you can be? That’s the conclusion we’ve all come to. We just have to work harder than the next guy. That’s all there is to it. That’s what we’re going to now.

I don’t get down on my guys or blame anybody. It’s just, man, how in the world are we going to get better?

You're going to have confrontations in racing. The stuff with the 1 (of James Buescher) car, I didn’t really see that coming at Bristol. I felt like that was a mutual deal on the frontstretch, getting pinched out against the wall. I’m against the wall, and there’s not much I can do to move concrete. Stuff like that, it happens in racing. I’ve had it happen on short tracks, I’ve had it happen in go-karts, I’ve had it happen in the Nationwide Series. That’s part of it. Everybody’s competing for a job, everybody’s trying to do the best they can. They’re looking to turn around their weekend just like we were, and frustration gets hot. That’s all over with. We’re moving on. You just have to look forward.

I have the most experience on short tracks. I’ve raced short tracks since the time I was 13 years old in the Allison Legacy Series cars. That’s what I’ve done. Obviously, I’m going to be better at places where I’ve got experience. That goes back to what I was talking about before. I’m racing with the best of the best who have 400 more starts than I do. I can’t expect to go out there and lay it to ‘em every weekend. But these are going to be our best opportunities to do it, when we go to Richmond and ORP and Loudon and laces like that that are my style race tracks. That’s where we’re going to have to turn our momentum around, and I think this weekend going’s to be a good place for that to happen.