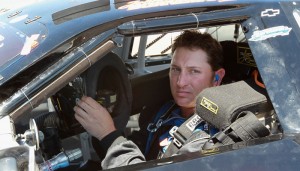 Ramona, Calif., and Talladega, Ala., are more than just 1,773 miles apart. They’re also miles apart on the similarity scale.

However, a mad dash through a myriad of cars tangled in a last-lap accident brought the signature moment in his racing career.

Borneman, who qualified 31st, and was 18th with 10 laps to go, barreled through a top-10 group that included six double-duty drivers and three series-only regulars on that thrilling final lap to come home fifth at Talladega.

After the race, an emotional Borneman told an ESPN2 national audience that Sunday was "The best day of my life."

Borneman comes from a racing family. His dad, John Borneman Jr., is a former NASCAR weekly series champion at now-shuttered Cajon Speedway near San Diego. The younger Borneman has three wins and a pole in NASCAR K&N Pro West competition. Prior to Sunday’s race, his career highlight was winning at Evergreen Speedway in Monroe, Wash., in 2006 – the track where his father recorded his only series win 28 years before.

"I think to do what he did at Talladega was pretty remarkable. It was impressive," said Ken Clapp, a senior consultant for NASCAR who tirelessly promoted races on the West Coast for nearly six decades. "I think it’s terrific that he could go back there and do so well with what they had. His dad told me they did not go back there with much to work with. They were short on funds. They only had four guys, plus him (Johnny). It was a big emotional win for the family. It was a big shot in the arm to have this happen. It was well deserved.

"John and other (former) Winston West competitors of that era lived their dream by competing in combination races with what was then the NASCAR Winston Cup Series, rubbing fenders with the likes of Richard Petty, Bobby Allison and Cale Yarborough.

"Johnny’s now fulfilling that family dream by taking the opportunity to race on a national level in the NASCAR Nationwide Series."

Sunday’s NASCAR Nationwide Series race – the second half of a doubleheader with the NASCAR Sprint Cup Series as turbulent weather postponed the originally-scheduled race from Saturday – was just the 17th of Borneman’s series career, and his third this year.

He failed to qualify at the season opener at Daytona International Speedway and also at Las Vegas Motor Speedway. In the two races where he did qualify, he finished 43rd at Auto Club Speedway due to a transmission issue and 36th at Phoenix International Raceway – after qualifying 43rd – as a result of an accident. His career-best finish had been 16th at Iowa Speedway in 2009.

Racing isn’t Borneman’s only occupation. In order to fund his dream, he holds a full-time job as a plaster and scaffold foreman. His racing career began in go-karts from 1989-94. He moved on to Late Models on road courses and ovals before making his NASCAR K&N West debut in 2000.