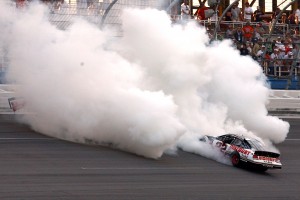 TALLADEGA, Ala. — Just in the nick of time, Brad Keselowski was approved to drive in Sunday's Aaron's 312 NASCAR Nationwide Series race at Talladega Superspeedway.

Perhaps polesitter Kevin Harvick wishes he hadn't made the field, given that Keselowski was the major obstacle to Harvick becoming the first driver to win a Nationwide and a Sprint Cup race on the same day. Earlier on Sunday afternoon, Harvick had won the Aaron's 499 Cup race.

With carbon monoxide levels barely acceptable under NASCAR's guidelines — the result of breathing fumes after damaging the crush panels of his Cup car in the earlier race — Keselowski surged to the front with a huge push from runner-up Joey Logano and won the race under caution because of a fiery wreck behind him in Turn 4 on the final lap.

Keselowski took the lead on the last lap of a green-white-checkered-flag finish that extended the race three laps beyond its posted distance of 117 laps.

With Logano glued to his rear bumper, Keselowski moved ahead of Harvick through Turn 3 at the 2.66-mile racetrack. As the cars roared through Turn 4, Jamie McMurray tried to force his No. 88 Chevrolet between Harvick's car and Clint Bowyer's.

McMurray spun and ignited a pileup in Turn 4 that sent Dennis Setzer flying into the catchfence and turned his car into a fireball. Setzer climbed from the car without assistance and later was released from the infield care center. The fence was severely damaged.

The victory was Keselowski's first of the season and the seventh of his career. If the race had begun five minutes earlier, however, Keselowski said he wouldn't have started it, much less won it.

"I didn't think I was going to get to run this race," said Keselowski, who took the series points lead from Kyle Busch. "To go from that moment where I thought, 'I just lost the championship; I'm not going to get to run,' to getting in the car and winning the race — an exciting race — it's just amazing.

"It's an awesome feeling to be here in Talladega (where Keselowski picked up his only Cup win to date last year). The track means a lot to me, and the fans that come here — that die-hard NASCAR fan — and to be able to win in front of them is pretty cool."

Following the race, NASCAR confiscated the left front spring and right front shock from Keselowski's car. They were under the minimum spring rate, and NASCAR will evaluate the pieces at its research and development center before determining any penalties.