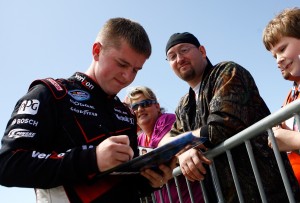 GLADEVILLE, Tenn. – Justin Allgaier had one of those races a driver needs to contend for a championship. Allgaier ran well in the Nashville 300 NASCAR Nationwide Series race, but had some trouble on pit road and had to bounce back to a fourth-place finish Saturday.

Allgaier was making a pit stop just past lap 100 when a tire from one of his tire carriers was knocked away by Ricky Stenhouse Jr., who was pulling out of his stall. Allgaier’s Penske Racing crew needed to retrieve the tire, and Allgaier struggled through a slow pit stop.

But Allgaier, the most recent winner in the series, persevered, rallying to his third top-five finish of the season and his fifth top-10 – the only driver in the series with top-10s in all five races.

"Unfortunately, that probably cost us the track position we needed to be up there contending for the win," Allgaier said of the pit-road mishap. "I just can’t say enough for these guys. They do such a great job week in and week out. It’s so tough when you’re making green flag pit stops. One little thing can go wrong, and it causes a lot of problems."

Still, a race like Saturday’s are By often what a driver needs to stay in the title hunt. What could’ve been much worse turned into a decent day for Allgaier, and he remained third in the points standings – 21 behind leader Carl Edwards and only five behind teammate Brad Keselowski.

"These guys push hard and they never give up," Allgaier said. "That’s what we proved today is that we don’t give up. We’re wanting to win races. Obviously, we didn’t win one today, but top-five is definitely putting us toward the championship run."