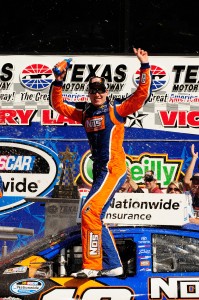 In the 28-plus years of the Nationwide Series, only two drivers have won five races in a row at a particular track. This weekend, Kyle Busch has a chance to join that unique group.

Dale Earnhardt won five in a row at Daytona International Speedway from 1990 to 1994, and Jack Ingram won five consecutive races at South Boston (Va.) Speedway in 1985-1986.

"I don’t know what the secret has been," Busch said. "I think just good race cars."

How about great race cars? It’s notable that Busch has won four in a row at the 1.5-mile track, yes. But it’s the way he won the four races that makes his streak so spectacular.

"I’m looking forward to getting back there," said Busch, who won last week’s race at Phoenix for his second victory of the season. "It’s going to be a different tire this time around, so I’m not really sure what to expect. We’ll see what it has in store for us. I’m looking forward to going out there and trying to win five in a row. It’d be something pretty neat and hopefully we can get it."

Crew chief Jason Ratcliff said the new Goodyear tire will change the team’s setup, but he’ll start with the same setup from the last race at Texas and go from there.

"It’s going to be different, and to try and anticipate exactly what it’s going to do is extremely difficult," Ratcliff said. "We’ll have Plan A and Plan B, depending on what happens."

Still, Ratcliff—a former resident of Texas—is pumped about going for five in a row.

"It’s a good track for Kyle. It always has been," Ratcliff said. "It’s been a good track for this team, even years ago before Kyle starting driving for Joe Gibbs Racing. We had some pretty decent runs there. It’s just been one of those tracks where everything just sort of clicks for us. We’d love to win five in a row.

"It’s always one of my favorite tracks to go to because I grew up not too far from there. I lived there for a little more than 10 years. It’s like going home for me. Every win is special, but that one is usually extra special for me since I typically have a lot of family and friends there. We’re putting a lot of effort into it this weekend."