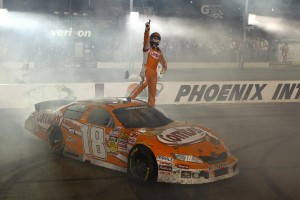 AVONDALE, Ariz.—Surging to the front after a restart with eight laps left in Friday night's Bashas' Supermarkets 200 at Phoenix International Raceway, Kyle Busch overcame a potentially devastating penalty with 50 laps left to post his second NASCAR Nationwide Series win of the year and the 32nd of his career, third most all-time.

Busch restarted 10th on lap 193 of 200 at the 1-mile track. By lap 195 he had gained second position, and on lap 196 he passed eventual third-place finisher Brad Keselowski for the lead.

Keselowski took the lead in the series standings by four points over Edwards.

Logano led at the final restart but fell back through the field after sustaining damage from contact with Busch's Joe Gibbs Racing Toyota on pit road on lap 191.

"Man, this car was pretty awesome tonight," Busch said. "It was super, super fast. Hopefully, that was an exciting win for the fans. I don't know how we could have made it any better of a show right there."

Busch led the field to a restart on lap 137 from the outside lane, but Keselowski nosed ahead before the cars reached the start-finish line. Cars in the outside lane stacked up behind Busch, triggering a 10-car wreck that necessitated a stoppage of nearly 10 minutes, as track workers cleaned up the debris.

NASCAR ruled that Busch failed to restart the race in the designated area between two red lines on the frontstretch wall and awarded the top position to Keselowski. On the subsequent restart on lap 145, NASCAR posted Busch's No. 18 Toyota for a pass-through penalty for jumping the restart.

The penalty dropped Busch to 19th in the running order, 20 seconds behind Keselowski. Over the next 38 laps, Busch improved to 11th before NASCAR called a caution for debris on lap 188.

"All I know is I paid NASCAR back by winning," Busch said.

Busch dominated early, having led 96 laps by the time Steve Wallace blew a right front tire on lap 111 and bounced his No. 66 Toyota into the No. 01 Chevrolet of his uncle, Mike Wallace, to cause the fourth caution of the race.

In fact, the only segment of the race Busch didn't lead resulted from an out-of-sequence pit stop on lap 17. Keselowski inherited the top spot for 15 laps, but Clint Bowyer stalled in Turn 1 to bring out the second caution, and Busch regained the lead by remaining on the track.

Townley, 20, crashed hard into the outside wall at the 1-mile track. Bowyer subsequently qualified a backup car 21st for Friday night's race.