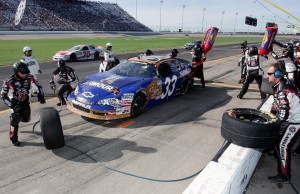 GLADEVILLE, Tenn. – A two-tire pit call didn’t seem to be the best choice for Kevin Harvick. But it turned out to be the winning move in the Nashville 300 NASCAR Nationwide Series race at Nashville Superspeedway.

Harvick had one of the top cars in Saturday’s 225-lap race, but Joey Logano and Brad Keselowski may have lost their chances at victory when their pit strategy went awry.

Harvick, meanwhile, made the two-tire call on his final pit stop look genius.

"Little nervous there when we took two and everyone else took four," crew chief Ernie Cope said. "But we made a plan and we stuck to it."

And when they do that, Harvick said, things usually work out. Besides, Cope didn’t need to worry, for it was Harvick’s decision.

Asked after the race who ultimately decides four or two tires, and Cope simply pointed at Harvick. Enough said.

"Well, I mean, we talked about on the radio," Harvick said after a brief chuckle. "We knew we at least had an option to put two tires on there. I really thought a lot more people would put two tires on because the tires really didn’t fall off that much as you went through the run – or at least ours didn’t. I know a lot of guys probably went through a bigger swing, but ours didn’t fall off that much.

It worked out for Harvick’s second victory of the season and 36th of his career. Harvick is only 12 wins away from tying the all-time series mark of 48 victories held by Mark Martin.

Harvick also claimed the Nationwide Dash 4 Cash $25,000 bonus as part of the series sponsor’s program. Harvick, a full-time Sprint Cup driver, was eligible because he had entered all four Nationwide Series races before Nashville.

Logano, in fact, was the only driver in the field not eligible for the bonus, and he had a car to match Harvick’s. Logano won the pole and led four times for 122 laps – 70 more than Harvick.

But under the race’s eighth caution on lap 144, Logano’s Joe Gibbs Racing team decided to keep him on the track – as did Keselowski’s Penske Racing team. Both drivers later had to pit under green, and though they rallied to the top 10, they were both too far behind to contend with Harvick.

"It was very frustrating," Logano said. "We had a winning race car and a car that could run up front. We led a lot of laps and gave it away. We should have pitted. Should have seen the other cars pitting behind us and come down pit road and we didn’t. It all backfired right in our face when we had to make that green-flag stop, and then the caution came out six or seven laps later.

"It stinks when you have a car that can win a race and we finish eighth with it. It’s embarrassing, but at least we have fast cars and can win a pole. We need to figure out how to finish these things up front."

Keselowski made quite a charge in the last 30 laps, moving from 18th to finish fifth. But he wasn’t happy either.

"Wasn’t enough," Keselowski said. "Everything stacked up against us that possibly could today. We caught every break there was. You can’t win races when you catch bad breaks."

Harvick made his own breaks with the two-tire stop, giving him track position and enough of a cushion on eventual runner-up Reed Sorenson to hold on for the victory.

"I was a lot more confident with the 20 (of Logano) and the 22 (of Keselowski) in the back," Harvick said of the final restart. "I thought the 18 (of Kyle Busch) would go better in the restart, but he didn’t. The 32 (of Sorenson) got going pretty good there, but I knew we had about 25 or 30 laps to hold them off. It got tighter than we would’ve wanted to, but we had the track position, so that worked out."