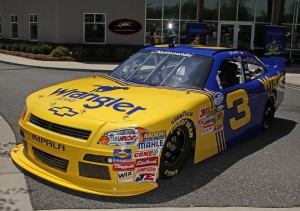 "This was an idea that came up as a way to pay tribute to my Dad, and it’s pretty cool that it’s a collaborative effort between JR Motorsports, RCR and DEI," said Earnhardt Jr. "The Wrangler car is definitely in the top-10 of coolest cars that have ever been on the race track. A lot of people identify with it, and I can’t think of a better way to honor my dad and celebrate his induction into the NASCAR Hall of Fame than to bring the Wrangler colors back with the No. 3 on the side, similar to the ‘Wrangler Jean Machine’ scheme of the 80s. I think it will be worth seeing, and I’m looking forward to driving it at Daytona."

The combination of Earnhardt Jr., DEI and RCR has a very brief yet shining history on the track together. In their one and only race together, Earnhardt drove the No. 3 Chevrolet to victory in the February 2002 NASCAR Nationwide Series race at Daytona International Speedway. That car, with just the one race to its credit, is on display at the RCR Museum in Welcome, N.C.

"Bringing this group of people and these organizations together is the best way I can think of to honor Dale Earnhardt’s induction into the NASCAR Hall of Fame," said Childress. "Dale means so much to all of us, as well as his fans across the country and throughout the world. We created a special piece of history together in 2002 and, with Wrangler back on board the No. 3 Chevrolet at Daytona, we look to make some more history in July. I know the fans will love it and much as we all will."

In support of the program, an array of licensed product will be available to fans from die-cast cars to apparel and select novelty items. Merchandise will highlight both Dale Earnhardt original Wrangler car and Dale Earnhardt Jr.'s current paint scheme. Fans can find the products trackside or through each of the represented team stores.

"Dale’s induction into the NASCAR Hall of Fame is truly a special honor for the Earnhardt Family as well as for all of Dale’s fans" said Teresa Earnhardt. "Dale was a competitor, but he was also a person who loved the fans and worked hard to connect with the people who supported him through his career. Wrangler was one of Dale’s first sponsors and it’s great to connect back with those early years, where it all started for Dale as he drove his way into the Hall of Fame."

Wrangler has a long history with all parties involved, and is the first apparel brand to have significant involvement in NASCAR, beginning in the 1980s when Dale Earnhardt was featured in the brand’s "One Tough Customer" marketing campaign. Wrangler was the primary sponsor of Dale Earnhardt and the famed yellow-and-blue "Wrangler Jean Machine" from 1981 to 1987. After a couple race team changes in the early 1980s including a brief 1981 stint with Richard Childress, Earnhardt moved back to Richard Childress Racing in 1984, bringing the brand with him as his primary sponsor. In 1998, the brand became one of the first corporate sponsors to sign up with Dale in his new role of team owner of Dale Earnhardt, Inc.

The Wrangler-Earnhardt legacy continued in 2004 with a relationship between a second generation Earnhardt and a "New Generation of Wrangler" – Earnhardt Jr. signed on as the endorsee for the Wrangler Jeans Co. line of new fits and styles of jeans and apparel. This longstanding relationship continues today with Earnhardt Jr. starring in the current brand marketing campaign.

"For Wrangler, this yellow-and-blue paint scheme signifies a lot of our brand history, marketing and persona from the 1980s," said Craig Errington, vice president of Wrangler® marketing. "It’s truly a piece of our history that will be on the track July 2 and it makes it that much more meaningful that it’s not only Dale Earnhardt’s son who will be driving it, but also the brand’s current partner and friend – Dale Jr."