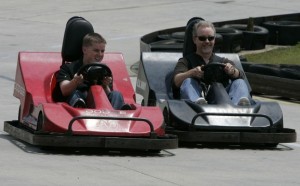 DARLINGTON, S.C. (April 21, 2010) – Justin Allgaier knows a thing or two about racing. In fact, Allgaier posted a top-five finish in his first career start at the treacherous Darlington Raceway in 2009. On Wednesday, all of that racing expertise went out the door when Justin traded his usual No. 12 Verizon Penske Racing Dodge for a go-kart at the Myrtle Beach NASCAR Speedpark.

Allgaier was in town to promote the upcoming NASCAR Nationwide Series event at Darlington Raceway and stopped at the Myrtle Beach NASCAR Speedpark to race fans who won a contest on the Speedpark’s Facebook page.

"It was a lot of fun to get out on the track and race with the fans today," said Allgaier. "They certainly didn’t make it easy for me out there; I had to fight for every inch on the track. It was great to spend time with the fans today, they are all so passionate about NASCAR and Darlington Raceway and it makes me really excited to get back here in a couple weeks for the Nationwide event. When it came down to the final race, we wrecked twice in the first two laps. That goes to show how bad people wanted to win tickets to Darlington."

"Justin was a great sport out there today with the fans," said Darlington Raceway President, Chris Browning. "He is one of the hottest up and coming drivers in NASCAR and to see him out there racing with the fans and having a great time is pretty cool. The fans are the reason we are all here racing so to be able to host an event like this for them is really special."

One of the hot topics of conversation was the upcoming NASCAR Nationwide Series event at Darlington Raceway, an event Allgaier finished fifth in last year in just his first start.

"In my first start at Darlington last year our team ran really well," said Allgaier. "I am hoping we can get to victory lane there this year. With all of the history at Darlington a win would be something really special for my career and something I would never forget."