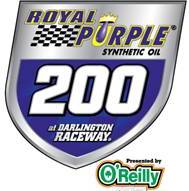 DARLINGTON, S.C. (April 26, 2010 ) – Royal Purple Synthetic Oil has signed a multiyear deal to be the title sponsor for the NASCAR Nationwide Series event held at the historic Darlington Raceway. This year’s race will be known as the Royal Purple 200 Presented by O’Reilly Auto Parts. The green-flag will fly on the event at approximately 7:30 pm on May 7.

"What a great opportunity to be the title sponsor of the NASCAR Nationwide Series event at Darlington Raceway. It’s a perfect pairing of Royal Purple's high performance and action packed racing," said Patrick Burris, Motorsports Coordinator for Royal Purple.

Royal Purple, founded in 1986, has emerged as a leader in manufacturing high performance lubricants to a wide range of consumers. Royal Purple’s state-of-the-art products, including marine, racing, snowmobile, and motorcycle oils, are focused primarily on outperforming other synthetic oils in the market.

"Royal Purple is a great fit at Darlington Raceway," said Browning. "They have a very unique brand that will incorporate itself very well in the NASCAR community and we are very excited to welcome them into the Darlington Raceway family."

Race day will feature NASCAR Nationwide and Sprint Cup Series practice, qualifying for the Nationwide and Sprint Cup Series’ in the afternoon, followed by the Royal Purple 200 Presented by O’Reilly Auto Parts under the lights. This race showcases some of NASCAR’s future stars as they test their skills on the storied 1.366-mile egg-shaped oval track. Dubbed "Too Tough to Tame" over 60 years ago, Darlington Raceway has a long history of featuring brilliant racers on a challenging track that easily separates the good from the great drivers.

Darlington Raceway or the track "Too Tough To Tame" as it is known to many, is where the purest of NASCAR competition meets true southern hospitality. A NASCAR staple since 1950, Darlington Raceway has seen some of motorsports most talented drivers thunder to Victory Lane. In 2010, NASCAR’s stars return to battle the track "Too Tough To Tame" in the Sprint Cup Series SHOWTIME Southern 500® and Nationwide Series Royal Purple 200 Presented by O’Reilly Auto Parts. The NASCAR Camping World Truck Series will also make a stop at Darlington for the first time since the 2004 season.

Don’t miss any of the paint-scraping action at Darlington Raceway in 2010. The NASCAR Sprint Cup Series and Nationwide Series will visit the track on Mother’s Day Weekend, May 7-8, for the SHOWTIME Southern 500 and Royal Purple 200 Presented by O’Reilly Auto Parts. The Camping World Truck Series will make its return to Darlington Raceway for first time since 2004 on August 14 for the Too Tough To Tame 200. Tickets for all three events are on-sale now. Tickets can be purchased by calling the Darlington Raceway ticket office at 866-459-RACE or online at http://www.darlingtonraceway.com/tickets/.