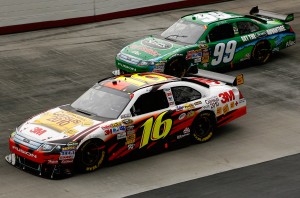 Greg Biffle (16) and Carl Edwards are two of Roush Fenway Racing’s four Sprint Cup Series drivers. Information on all of Roush’s drivers can be found at RoushFenway.com, which is being retooled to attract more sponsors. (Photo: Jason Smith/Getty Images for NASCAR)

Roush Fenway Racing is working with New York-based digital agency The Barbarian Group to overhaul its online strategy and incorporate more of a sales and marketing structure into its official website to attract more sponsors.

"We’ve got to get the site to communicate Roush Fenway as an entertainment and marketing entity, not just a race team," said Benjamin Palmer, CEO and co-founder of The Barbarian Group. "A lot of people might not realize that Roush Fenway puts together these very integrated, customized marketing programs for their clients and we’ve got to find ways to tell that story."

Telling that story will begin with a redesigned website later this year that will put the NASCAR team’s business side front and center. The team is spending close to $500,000 in startup costs to begin the relationship with Barbarian and convert a space in the race shop into a video studio, and five executives have been reassigned to focus on the relaunch, Roush Fenway president Geoff Smith said. The budgets dedicated to online efforts for most NASCAR teams are in the middle to high five figures.

While both sides are still working on what that site will look like, certain sales elements are beginning to show up on RoushFenway.com. The result is expected to be a website that’s half competition, half business.

Already, Roush Fenway has begun to create sales and marketing videos that run on the site, including a QVC-type spoof that shows a host trying to sell sponsorship on Ricky Stenhouse Jr.’s Nationwide Series car. That video ran on the website and other social media outlets such as Facebook and YouTube.

The QVC spoof was part of an exercise by all of Roush Fenway’s marketing executives to come up with at least 10 video ideas "that would tell a story and make a sales point," Smith said. "It’s a way for us to modernize our outreach.

"Frankly, we don’t know what will be a dud or a home run with marketers, but this is at least a way to engage them."

Roush Fenway sells sponsorship out of its shop in Concord, N.C., but a website focused more on sales and marketing will help the team cast a much wider sales net for new partners.

"We’ve got to rethink how sponsorship sales and prospecting is being done in this new economy," Smith said. "A lot of team owners have been reluctant to make investments in sales and marketing because they remember that in the booming economy, people came to us. You can’t take that approach anymore. We’re living in a different world and we’ve got to ask ourselves what we have to do to compete in that world."

As Roush Fenway changes its digital outlook this year, the site will soon look more like an agency’s than a race team’s. Current sponsors will be featured, case studies will highlight successful marketing programs, and available inventory on the race teams will be advertised.

That’s a sharp contrast from the approach Roush Fenway tried with Turner Sports Interactive two years ago when they first partnered to deliver the site. In the infancy of this deal, Turner’s goal was to acquire the online rights to multiple teams in an attempt to create a network of NASCAR team sites. Turner already owned the rights to run NASCAR.com, and the acquisition of more team sites theoretically would have enabled Turner to aggregate traffic the way many leagues do, including NBA.com, which Turner also manages.

But Turner was unable to pool those sites and its deal with Roush Fenway was not renewed last year when the team began thinking about a different approach.

Roush Fenway had hoped the site could drive enough traffic that web advertising would become a valuable piece of the team’s inventory. It never happened. "What we found was the volume on the site wasn’t making it commercially viable," Smith said.

NASCAR team sites just haven’t managed to become an online destination for race fans, who tend to follow individual drivers, not the organization behind the teams. NASCAR teams also do not sell tickets, which limits traffic compared with the sites run by other pro sports teams and leagues that do sell tickets.

But most teams don’t tout their sites as a legitimate source of exposure.

It’s mostly a value-added component to a sponsorship deal.

"At a time where budgets are shrinking across the board, we’ve found that teams sometimes struggle to define a value proposition for their site that justifies the spend," said Chuck Tate, president of Racersites.com, a company that manages sites for Chip Ganassi Racing, Penske Racing and the IndyCar Series. "It’s not surprising to see Roush get creative and go in a direction that has not been tried before."

The Barbarian Group has a long list of clients, from Burger King and Red Bull to General Electric and Dove soap, but Roush Fenway represents its first work in the NASCAR space.

"From what I see, nobody in the sport is doing a lot with the Internet, especially compared to other sports," Palmer said. "How can we look at the race team as a more serious media property?"

One of the web-oriented sales efforts Roush Fenway tried was a direct mail to 3,000 brand marketers. They were asked to go to a specially designed URL to take a survey about NASCAR, marketing budgets and their thoughts on the economy.

"We were trying to take the temperature of the marketing community," Smith said.

Only 50, but six of those have attended a race with Roush Fenway "and a total of 15 have agreed to business meetings." Smith described these companies as major spenders that don’t have a sponsorship in NASCAR. No deals have been closed, but Smith is encouraged by the new leads generated.

"Online, we can reach out into a cloud and pull back people who hopefully will take a closer look at who we are," Smith said.

Michael Smith is a reporter with SportsBusiness Journal.