Share All sharing options for: Taking the fifth: Kyle Busch wins another Nationwide race at Texas 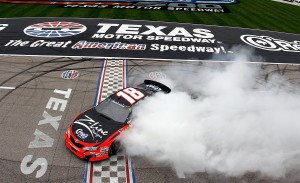 Busch is the third driver in series history to win five consecutive races at one track, sharing that distinction with Dale Earnhardt (Daytona) and Jack Ingram (South Boston).

With Denny Hamlin having won the rain-delayed Samsung Mobile 500 Sprint Cup race earlier in the day, Busch completed the sweep for Joe Gibbs Racing, marking the first time an organization has won both legs of a same-day NASCAR doubleheader. Busch finished third in the Cup race behind Hamlin and Jimmie Johnson.

"It was just a phenomenal day," said Busch, who pulled away from a Lap 174 restart after contact in Turn 2 between the Fords of Roush Fenway Racing teammates Colin Braun and Ricky Stenhouse Jr. caused the fourth caution of the race on Lap 167.

"We were able to just run around there all day and bide our time, and there at the end, we were going to try and save fuel and go the rest of the way if need be. But that caution came out, and we had to race Joey for it.

"He kept me on my toes there. We were a little too loose to try to go real, real hard. I couldn’t get away from him, but then it seemed like he got a little bit tight, and I started moving away."

Busch, the reigning Nationwide champion, took a 20-point lead over fourth-place finisher Brad Keselowski in the series standings. Carl Edwards, the 2007 champion, broke an axle late in the race and finished 30th. Edwards dropped three positions to fifth in the standings, 106 points behind Busch.

Asked whether his success this year might make him reevaluate his decision not to run a full Nationwide schedule, Busch deferred to team owner Joe Gibbs.

"I had no more gotten to the winner’s circle when about three of the crew guys are going, ‘Hey, can we run for a championship?’ " Gibbs said. "I think we’ve laid out a plan there. We’ll talk it over with Kyle."

Busch said the noncompanion events would pose a logistical problem in running full schedules in both the Cup and Nationwide series, though he did so last year.

"I want to, but it’s up to these guys," Busch said, pointing to Gibbs. "I’d like to, but we know how difficult it is to run both, and what it takes away from the premium spot, which is the Sprint Cup Series title.

"When you go from Sonoma to whatever the new road course is in Wisconsin (Road America, with both races scheduled for the June 18-20 weekend), you’re going to have to skip all of Saturday in Sonoma to be there for that event in the Nationwide Series in Wisconsin, so you really hinder your chances to get a good race car setup for the race that’s going to be on Sunday in Sonoma.

"That’s the biggest thing that I look at, but all the other ones aren’t too bad, so maybe we skip one and can still win the deal—I don’t know."