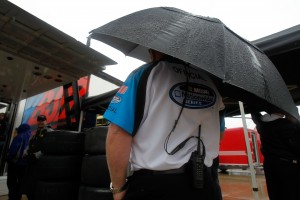 A NASCAR Nationwide Series official stands in the garage during a delay to the O'Reilly 300 at Texas Motor Speedway. (Photo: Todd Warshaw/Getty Images)

The Nationwide race is scheduled for 9 p.m. Eastern and will be televised on ESPN2. Green flag for the Cup race will take place at approximately 3:18 p.m. Eastern.

Fifteen drivers, including the top four in the Nationwide standings — Brad Keselowski, Carl Edwards, Kyle Busch and Kevin Harvick — will start both races. Busch is attempting to win his fifth straight Nationwide race at Texas.

Another double-duty driver, Joey Logano, will lead the field to the green flag Sunday night. Logano edged Bowyer for the pole in Friday’s Nationwide qualifying session.

Jamie McMurray will make his first start in the No. 88 JR Motorsports Chevrolet, following the release of driver Kelly Bires early in the week. Landon Cassill will drive the No. 7 JRM Chevy for the second straight race.

"It’s going to be a long day for me—and for Carl, Clint, Kyle and Joey," said Keselowski, who will start 12th in the Nationwide event. "Those are tough days that really test you, more than just as a competitor but as an athlete. It makes an interesting challenge, and hopefully for some of the regular Nationwide guys, it evens the playing field a little bit.

"I think I’ve got two good cars. I did a bad job of qualifying my Cup car (37th), but my Nationwide car is really fast, and my Cup car had pretty decent speed in practice."

"When it cools off and the sun goes down, the track picks up a lot of speed," Ratcliff said. "The things that you didn’t see in practice, like when you pick up speed, your car travels more and bottoms things out. Those little things that you may not be prepared for, because you thought you were racing under the same conditions that you practiced, can pop up and bite you so you have to think about that a little bit.

"Other than that, the track just gains some grip. I wouldn’t expect to see a big balance shift, just the speeds will pick up and be faster."