Share All sharing options for: Braun Racing's Jason Leffler on a roll after crew chief change 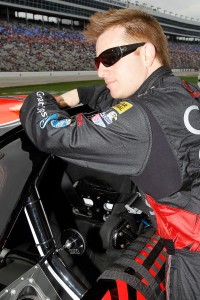 CHARLOTTE, N.C. - A lot of NASCAR drivers don’t believe in momentum in stock car racing, thinking you are only as good as your last race.

Don’t count Nationwide Series driver Jason Leffler among that group. Leffler heads into Saturday’s Tech-Net Auto Service 300 at Charlotte Motor Speedway with consecutive top-five finishes, so he might be a little biased.

"Momentum is good, and we certainly have that over the last two weeks," Leffler said. "It just seems to make everything flow better at the track. We’ve got momentum on our side, for sure."

And he has that momentum after a crew chief change. Braun Racing replaced Scott Zipadelli with Trip Bruce before the Darlington race, and Leffler went and finished fifth.

A week later at Dover, Leffler worked his way through a late-race crash to finish fifth again. Now, there’s a smile under his ever-present Mohawk haircut.

"I feel a lot better than I did three races ago," Leffler said. "Up until that, we didn’t have any results at all, nothing to show for anything. We’ve gotten results the last couple weeks. Obviously, once you start getting results, it kind of snowballs from there. Everybody’s confidence builds."

Leffler had a slow start to 2010, with one top-10 finish in the first nine races of the season. And that was after a career-high 20 top-10 finishes in 2009, when he finished fourth in the Nationwide standings.

"I was really confident in what we needed to change; everybody was," Leffler said. "Still, there’s that unknown when you do make a change like that. You still want to see results right away, and we got them right away. I was nervous before Darlington, but after practice I was really pumped up because I knew my car was really good and everything was working good. Then we ran real well in the race, and it carried over to Dover.

"I’ve got a lot of confidence in my guys. They do a great job."

Bruce, however, is only an interim crew chief, as he leads a Camping World Truck Series team owned by Doug Stringer, a co-owner of Braun Racing.

"We’re talking to some people," Leffler said. "And we have Stewart Cooper, who’s the crew chief on the 38 when Kasey (Kahne) runs it. He’s available there if we need somebody until we find another permanent guy.

"Trip Bruce is awesome. I’d love to have him, but he’s got some commitments there on the truck side."

Still, if Leffler does well at Charlotte …

"We go win Charlotte, and I’ll be jumping up and down and screaming," Leffler said.