Share All sharing options for: Brendan Gaughan is OK after being forced out of car at Charlotte Nationwide race 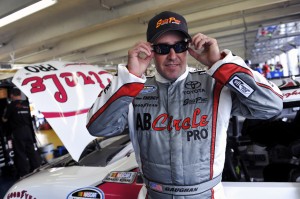 Gaughan was involved in a wreck early in the race, and the damage to his No. 62 Toyota caused fumes from the exhaust to come into the car. Gaughan eventually got out of the car, with Mark Green finishing the race.

Via Twitter, Gaughan said, "Hey gang, I'm okay, thanks for checking on me, and a big thanks to Mark Green for finishing for the team!"

Gaughan was credited with a 32nd-place finish and lost three positions to 14th in the Nationwide owners standings.