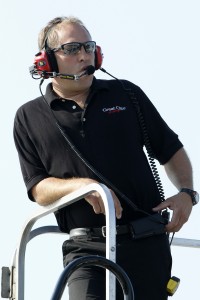 DARLINGTON, S.C. – The interim tag may not be long on crew chief Trip Bruce, who guided NASCAR Nationwide Series driver Jason Leffler to his first top-five finish of the season in Friday night’s Royal Purple 200 at Darlington Raceway.

But there’s a catch. Bruce, you see, already has another job. He runs the Stinger Motorsports Camping World Truck Series team for Doug Stringer, a co-owner of Braun Racing.

"He’s got other responsibilities, though, with Doug Stringer and his truck program," Leffler said. "I don’t know. We’ll see. We’ve got a great little team here."

Bruce replaced Scott Zipadelli on an interim basis beginning with Darlington. And all he did was help Leffler get his best finish since a third last year in Texas.

"Results show. We have everything there," Leffler said. "We had it last year, and we had to take a few steps backwards, really, and get back to a baseline. It worked. We’ve got to utilize all the information we have. We have good teammates and three other teams and drivers, and we did a good job of that tonight."

Bruce made the call to keep Leffler on the track during a late-race caution, and Leffler did the rest.

"Track position’s so important with these little motors in these cars," Leffler said. "It’s so hard to pass. All in all, it worked out for a good finish for us."

It almost didn’t on the final restart, when Leffler suddenly darted to the apron heading into Turn 1.

"We were that low on gas, and it must’ve just came that low on the pickup and sputtered that time," Leffler said. "I was actually trying to get out of Kasey (Kahne’s) way, but he was already on the inside of me. It costs us a spot. We probably would’ve run third and fourth.

"It was the most competitive we’ve been all year, so I’m really happy about that."