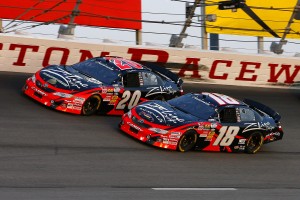 "Kyle is so good on restarts, it’s hard to hold him off," Hamlin said. "I knew that if I could just hold him off for one lap, we could clear him. He gave us a run for our money. It’s so hard on this race track to run two-wide, especially that first corner, but me and him made it work.

"I talked to him over the radio. I said, ‘Is this the new Kyle, or the old Kyle?’ It depends on which one is gonna race me."

It must've been the "new Kyle," for Busch raced Hamlin cleanly.

The victory was also the first for crew chief Kevin Kidd, who joined JGR's No. 20 Toyota team for 2010.

"It’s just an overwhelming feeling right now to be able to go to victory lane and particularly to do it at a place like this," Kidd said. "It has as much history in it with great crew chiefs and great drivers who have been to victory lane here. I’m just proud to be a part of that now."

Hamlin pitted for the final time on lap 91 and was one of four drivers who didn't pit under caution with 25 laps to go. Busch's crew chief Jason Ratcliff wanted to stop for tires, but Busch overruled him.

"We kind of had a little miscommunication there," Busch said. "When I saw the 20 stay out, I'm like, 'Well, I'm going to stay out.' And then when I saw as many guys come behind us, I was like, 'Oh, that was the wrong call. We're going to get run over here.'"

But Hamlin and Busch pulled away on each of the final restarts, though Busch was unable to make the pass on his teammate.

"Our cars ... were really fast on restarts," Busch said. "The tires came back pretty quick, and you could get back going pretty well. It's hard to race that fast around this race track that close together and not wreck. I guess I thought better of wrecking and finishing second tonight."