Share All sharing options for: Greg Biffle closing in on first win with Baker Curb Racing 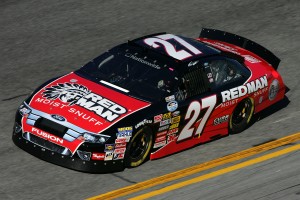 Greg Biffle has energized Baker Curb Racing with his performances in the team’s No. 27 Nationwide Series Ford. (Photo: Getty Images for NASCAR)

And, boy, has that paid off. Biffle is eighth in the Nationwide standings heading into Friday’s Royal Purple 200 at Darlington Raceway despite missing two races. Biffle is coming off a second-place finish at Richmond last weekend, his third top-five and sixth top-10 finish for Baker Curb this year.

"I cannot overstate the value of Greg," Baker said. "And when you put Greg and (crew chief) Rick Viers together, it’s a dynamic duo, to say the least. That’s my term for them."

Biffle gives the team his veteran experience, plus his Cup track time can translate into immediate knowledge for Baker Curb.

"Then you put on top of that the fact that it’s Greg Biffle," Baker said. "And as far as I’m concerned, of the Cup drivers, he’s the most underrated driver that puts on a Cup uniform every weekend."

Baker Curb hasn’t won in the Nationwide Series since 2005, before Baker and Mike Curb bought the former Brewco Motorsports team. But Biffle has been close this season, with runner-up finishes at Richmond and California.

That could happen at Darlington, where Biffle has two Cup wins and one Nationwide victory.

"I can’t wait to go to Darlington," Biffle said. "It is my favorite place."

Baker was a confident owner after last week’s Richmond race.

"I’m so proud of these guys, I don’t know what to do. I know how much they’re doing with how little they’re doing it with. That makes a difference."