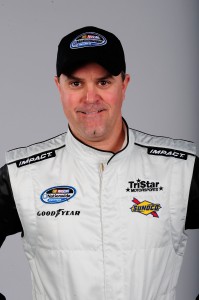 TriStar Motorsports driver Jason Keller has made more Nationwide starts than anyone in series history, and he'll try for his 500th on Saturday. (Photo: Sam Greenwood/Getty Images for NASCAR)

Jason Keller will set a milestone for starts in the NASCAR Nationwide Series this weekend when he starts the Heluva Good! 200 at Dover International Speedway.

"The potential for No. 500," Keller said earlier this week. "Let's not get ahead of ourselves. Of late, it's been kinda tough to get those starts, a little tougher than I anticipated.

"I guess, if nothing else, I'm the first one in history to be able to attempt 500 starts."

OK, we stand corrected. Keller will attempt to make his 500th start in the series when he qualifies Saturday morning. He's already the series' record-holder for starts, so Dover will add to his accomplishment.

"I'm not all about the quantity of starts," Keller said. "I want my starts to be quality, too. But looking back, nobody's ever done it, so I've got to be proud of that fact. I'm a little bit careful. I don't want this to be the end of the road. Even with the bumps in the road that I've had with my race team this year, we've had bright spots too.

Keller's No. 35 TriStar Motorsports team isn't locked in the Dover field because it's outside the top 30 in the Nationwide owners standings, so Keller is fighting emotions this week. Yes, he's happy to have the potential of No. 500, but there's the possibility of failing to qualify, too.

"(Emotions) about as far end of spectrum as you could possibly fight," Keller said. "Going into this thing this year, I'd hoped by the time my potential 500th start rolled around that we'd be locked in the top 30. But that just hasn't happened.

"It is an added stress. But I'm not going to let myself be excited about the 500th start until after 11 o'clock on Saturday morning."

Keller, who has failed to qualify for three races this year, has stopped to reflect on his driving career this year, but as with many drivers, he remembers the races that slipped through his fingers.

"I think about the potential for my very first win that got away at Dover," Keller said of a race there in 1995. I'm leading the race with 14 laps to go, and went to lap Jim Bown, who was a lapped car, and he shoved me up the racetrack—and I finished fourth."

Later that year, Keller got his first win at what is now called O'Reilly Raceway Park for the first of his 10 victories. And he also did go to victory lane at Dover in 2000.

But this weekend, the celebration—if there is one—will be on a smaller scale. Simply getting in the race will be important enough.