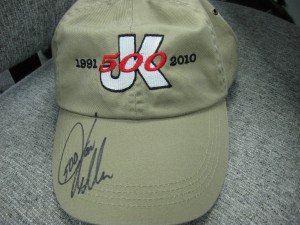 DOVER, Del. - NASCAR Nationwide Series driver Jason Keller looked a little relieved that he qualified for his 500th race in the series, but he also was looking forward before the Heluva Good! 200 at Dover International Speedway.

Keller, wearing a resplendent new white firesuit to commemorate his 500th start in the series, said he's happy to have made 500, but he's looking forward to many more.

"It’s really cool, but now the work begins," Keller said during driver introductions Saturday. "We’re still battling to get in that top 30 – always a competitor. It’s hard to really enjoy what you’ve got going on. But proud. You use the word cool, but as much as anything, I’m proud of where we are.

"I just don’t want people to view this as the end. I feel good that we’re building something with this race team, and I’m staying healthy. Hopefully, we can have a lot more to come."

Keller's No. 35 TriStar Motorsports team has failed to qualify for three races in 2010, keeping it out of the top 30 in the Nationwide standings. The top 30 in the owners standings are locked in each race.

Keller wouldn't allow himself to celebrate 500 starts until he actually qualified for the race, which he did Saturday morning, but he was all smiles just before the race.

NASCAR President Mike Helton presented Keller with a commemorative award at the drivers meeting and then re-presented it on the pre-race stage.

And as Keller went from the stage to his car, many of his former crew members surprised Keller as the gathered at the car for a photo.