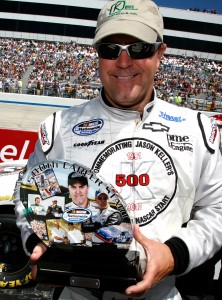 NASCAR honored Jason Keller with a trophy on the grid before the Nationwide Series Heluva Good! 200 at Dover International Speedway. (Photo: Jerry Markland/Getty Images for NASCAR)

DOVER, Del. – That was hardly the race Jason Keller wanted in his 500th start in the NASCAR Nationwide Series.

Keller finished 33rd, 21 laps off the pace, after spending time in the Dover International Speedway garage to fix a broken shock mount.

"After I made the race, I was ready to run good," said Keller, who made the race via qualifying. "We got the lucky dog here. The 18 (of Kyle Busch) was so ridiculous fast. We were going to battle to be on the lead lap all day. We were actually running in that 20th range, and I think we were going to be OK."

But then the shock mount broke, and "the rest is history," Keller said.

The race was indeed history-making for Keller, as he became the first driver in series history to reach 500 starts. NASCAR awarded him a plaque before the race, and several former crew members surprised Keller after driver introductions as they posed for a photo with him.

"That was cool. I got a little choked up about that," Keller said. "Now that the race is over and the dust is settled, I’ll have a little bit of time to reflect on some of the cool things. I hope there’s a lot more. I’m not going to stop at an even number. I’m going to keep going."