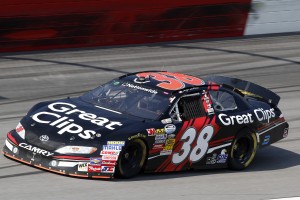 Kahne finished fourth in the Royal Purple 200. For the Nationwide Series, NASCAR compresses the shock in post-race inspection and then gives it 90 seconds to rebound to its proper position. Kahne's shock apparently didn't rebound in the required time.

"We will take a front left shock back to the R&D center to look at it further and discuss it further in our Tuesday meeting," NASCAR spokesman Kerry Tharp said late Friday. "Any penalties that would be coming would be announced probably Tuesday afternoon."

The incident appears similar to what happened to Brad Keselowski after he won at Talladega two races ago. The right-front shock on Keselowski's car didn't rebound in the allotted time, and NASCAR fined Keselowski and the team 25 points and crew chief Paul Wolfe $10,000.