Share All sharing options for: Kyle Busch keeps on rolling with another Charlotte Nationwide Series victory 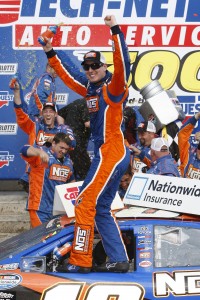 CONCORD, N.C. - Nothing can slow down Kyle Busch, not even himself. Busch overcame a pit-road speeding penalty to come back and win the Tech-Net Auto Service 300 NASCAR Nationwide Series race Saturday at Charlotte Motor Speedway - his fourth national series victory in a row.

Busch has won the last two Nationwide Series races as well as the last Sprint Cup and Camping World Truck Series races. If he wins Sunday's Coca-Cola 600, Busch will sweep all three points-paying races at Charlotte.

The victory was Busch's fifth of the season, 35th of his career and sixth at CMS. He's won six of the 14 races at Charlotte, tying Mark Martin for the all-time lead here.

But after the first 50 laps of Saturday's race, it appeared Busch would be lucky to finish in the top 10. On lap 47, Busch hit pit road after saying his right-front tire felt funny. After his Joe Gibbs Racing team completed the stop, however, Busch was caught speeding exiting the pits.

After a pass-through penalty, Busch was in 32nd, two laps down, with leader Kasey Kahne on Busch's rear bumper.

But he held Kahne off, and after the leaders completed green-flag stops, Busch was back on the lead lap. He caught a break with a caution just past the halfway point to be able to pit with the leaders, and then on lap 139, his No. 18 crew got him off pit road with the lead.

From there, Busch withstood three restarts in the final 12 laps, including a green-white-checker, to hold off Brad Keselowski.

"It’s a testament to this team and these guys and (crew chief) Jason Ratcliff, the race car he prepared for me and all the guys at Joe Gibbs Racing – engine, chassis shop," Busch said. "They gave me a good piece here today. We’ve been fast in this car and this NOS Energy DrinkCamry was fast again today. We had a good car. We messed around some there in the beginning, and I thought I was really tight and just blowing the right front tire off of it. I came down pit road to make sure we stayed on the safe side of it and we were able to battle back."

Busch steps out of the No. 18 for the next three races for Brad Coleman as the Nationwide Series has three consecutive standalone events.

"I thought we had a great year last year in winning the championship, setting a lot of records and doing what we did then," Busch said. "We knew that we could do the same thing with Jason coming back and all the guys staying the same. I felt like we had a really good race team. I’d like to do it, but you have to win a Cup championship, I think, well, I know.

"For us, I feel like we’re in the best position that we can be this year. How JGR has been running lately, it’s pretty exciting. I’m real excited about the summer months and am going to miss Jason and the guys running the Nationwide car, but yet, pretty pumped about Dave (Rogers, Cup crew chief) and what we can have."