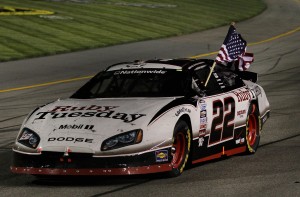 RICHMOND, Va. – The way things have gone for Penske Racing’s Brad Keselowski in his NASCAR career, he knew his domination of the Nationwide Series Bubba Burger 250 at Richmond International Raceway would end in simplicity.

Keselowski has been clouded in controversy for much of his young career, and driving away from the Nationwide field wouldn’t be that easy.

And sure enough, six laps from the scheduled finish, the yellow flag wave to slow Keselowski’s assault.

"It wouldn’t be right if I won a race without a bunch of drama," Keselowski said. "You guys wouldn’t have anything to write about. I was trying to help you out.

"Of course, I knew the whole time we were running, I’m like, ‘How is this going to fall apart? I’m going to get a flat tire or a yellow’s going to come out.’ It’s more mentally draining leading the race than running fourth because all you do is worry."

Keselowski had led 188 laps before Paul Menard brought out the final caution, and then Keselowski and the rest of the leaders had a choice: To pit or not to pit. There would be a green-white-checkered finish, so would new tires make much difference?

Via Twitter, Sprint Cup driver chimed in: "Bad move by staying out. They will get freight-trained. I promise."

He was talking about his Cup teammate, Kyle Busch, as well as Keselowski’s teammate, Justin Allgaier, who stayed on the track during that caution.

Keselowski and his crew chief, Paul Wolfe, debated what to do. But the situation was so frantic that Keselowski couldn’t remember what they talked about.

"I watched Kyle," Keselowski said. "I don’t even remember what Paul said, to be honest. I watched Kyle, and he kind of looked like he was pitting. I knew he would do the opposite. Paul and I talked about that. That’s what cool and me and Paul; he kind of reads my mind at the same time.

"I was watching Kyle run down on the apron like he was going to pit. I wanted to make sure I ran as high up as possible and then commit at the last second, hoping I could catch him going on to pit road, too, because I wanted everybody to come on pit road. But Kyle made a great move, and at the last second got off of pit road."

Keselowski came close to a commitment-line violation, but NASCAR ruled his move off the track was legal.

"The rule is you have to have two tires on or under the orange box, and he didn’t touch the box," Nationwide Series Director Joe Balash.

Busch said the decision to pit was his alone.

"We fought there when we got back in traffic and tried to get back up towards the front," Busch said. "We could on the long run, but we just didn’t have anything for the 22 (of Keselowski). He was so stellar. … That’s what happens when you stay out. I think (Busch’s Cup crew chief) Dave Rogers makes the right calls. Tonight was my call to stay out. Jason wanted to come in. I just wanted to see what it would just do. You have to hold them off for a green-white-checkered, and obviously this is the best that I could fight them off."

On the restart, Allgaier, starting in the outside lane, spun his tires and was slow to come up to speed. Carl Edwards went to the outside to go around Allgaier but realized he had jumped the start and slowed to get back behind Allgaier. NASCAR ruled after the race that Edwards would not be penalized.

Keselowski was fourth, in the outside lane, and Greg Biffle, who had changed two tires, darted past Busch for the lead. Keselowski then stalked Biffle on the white-flag lap.

"I held him off as long as I could," Biffle said. "I was going to try and hold him down in 3 and 4, but he just drove in the corner so far, I had to at least drive in beside him. And I couldn’t keep it down. I did all I could do to try and win."

Keselowski passed three cars in the final two laps to get the win, despite giving up the lead under the caution.

"We didn’t want to see that caution come out, but we felt we were good enough," crew chief Paul Wolfe said. "The tires were obviously were the way to go."

"The call that Paul made there at the end was obviously a gutsy call," Penske said. "But I think when Brad came out there on four tires, I think we were in great shape."