One and done? Clint Bowyer, Denny Hamlin insist controversy is already over

Share All sharing options for: One and done? Clint Bowyer, Denny Hamlin insist controversy is already over 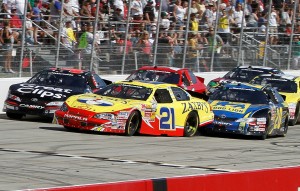 DOVER, Del. - Denny Hamlin and Clint Bowyer woke up the Dover International Speedway crowd with a late-race dustup that sent Bowyer to the garage and the NASCAR Nationwide Series hauler.

On the race’s penultimate restart, third-place Hamlin tried to dart to the inside of second-place Bowyer at the drop of the green flag. But Hamlin said he misjudged the move and punted Bowyer, triggering a multi-car crash as the field raced into Turn 1.

After a red flag, Bowyer came out of the pits and ran into the side of Hamlin’s car, sending it into a half-spin in Turn 2. Bowyer was immediately parked and called to the NASCAR hauler.

"They’ve had a frustrating year, bringing home a lot of torn-up race cars," said Bowyer, who had replaced John Wes Townley in Richard Childress Racing’s No. 21 six races ago. "It is what it is. I don’t have a beef with Denny. We’ll be fine. I got one taken from me. Just a little payback."

And Hamlin didn’t seem to mind.

"I’m sure he was frustrated," Hamlin said on ABC. "I don’t fault him. I’d be frustrated, too. It’s hard for me to say he was in the wrong. It ruined his day, and he got our day. I try not to take these races too seriously and get too worked up about them. Obviously, our focus is for tomorrow’s races. We’re going to move on and race each other clean from here on out."

Hamlin said he thought Bowyer spun his tires on the restart and just made a poor move.

"I just clipped him on the way by, nothing intentional," Hamlin said. "He spun his tires, and I was trying to go. I just misjudged it, barely. I did it earlier with the 15 car, just barely misjudged it. It’s hard to blame it on not running these cars a lot, but I just didn’t know how close I was and barely clopped him and sent him up and ruined his day. It obviously ruined ours, too – an eye for an eye."

Bowyer said he wasn’t sure he spun his tires, but he, too, said the controversy was over.

"I don’t even know. It happened all so fast," Bowyer said. "We were all on old tires, of course you’re going to spin a little bit. That’s the tough thing about being on the inside when the guy’s got the outside. Kyle did everything he was supposed to do. When you’re the third-, fourth-place car on back, you can lag back a little bit and get a run and anticipate that. When you’re on the inside, you’ve got to stay door-to-door with him. When he goes, you have to react as fast as you can and you ended up spinning just a little bit. It was just one of those things, man. We’ll go on and get over it."