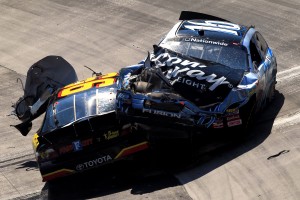 Team co-owner Jack Roush said the move was to increase sponsorship opportunities for the team, but Braun also had a slow start to 2010. The 21-year-old had a best finish of 13th in his first eight races, and the No. 16 team dropped out of the top 30 in the owners standings, forcing him to make races via qualifying.

Braun will return to the car next week at Dover and in several others races when Con-way Freight and 3M sponsor the team.

Q: How tough has it been for you to be here and see your car with somebody else in it?

Q: Is Kenseth saying same things as you, as far as car?

Braun: Yeah, it seems to be pretty similar. I feel like we’re both pretty similar in the way we drive, I guess, and what he wants in his race car. That’s a good thing. It’s great to be able to talk to him and go, ‘Hey, how loose is loose? How tight is tight?’ I try to get an idea of what the different amounts of what the problems are from somebody who obviously has a lot of experience and really knows."

Q: When Roush told you, how long did it take for you to stop kicking the dog, so to speak?

Braun: I guess I can’t say it was a huge surprise because we obviously haven’t had a great season to start off with. I’m just happy to have really great sponsors like Con-way Freight and 3M that are sticking behind me and keeping with me because it’s certainly been a tough start to the season. A lot of it’s just been bad luck, random things happen, been in the wrong place at the wrong time. It’s a tough business. It’s about results. It’s about learning and trying to get better, and I feel like this was a move that he made to try and help me learn more than driving the race car. He thought I could learn more being out watching matt, seeing how a Cup champion does it.

Q: When you get back in the car at Dover, don’t you think there will be even more pressure?

Braun: I don’t know if it’s going to be more pressure because I feel like almost the pressure’s off now because we’ve done this. We’ve tried to learn as much as I can, and I feel like it’s just time to go racing and get after it in Dover and have some good runs for Con-way Freight and 3M and make the most out of the season.

Q: A lot of people thought the crash at Texas with (teammate) Ricky (Stenhouse Jr.) had something to do with it. That’s not the case, is it?

Braun: I don’t think it was. It was just culmination of the whole season that we’ve had. Driving one of these cars, you never want to be in a position where you’re outside the top 30. I think he just decided to try something, shake something up. I think (Roush) thought I could learn more by stepping out of the car and watching Matt do it."

Q: Texas, that was just a racing accident? What happened?

Braun: We were racing really hard for the lucky dog there. I thought I had a faster car, and I’m sure he thought he had a faster car, and I was trying to get by him. I just screwed up. I just lost the nose coming off of Turn 2 and touched him. Man, I felt really bad. Of all the people to wreck, it had to be my teammate – and we’ve both had the seasons we’ve had, obviously not being great starting off. I felt terrible about that, but I guess you can’t undo the past.

Q: So there’s no issue with you and him?

Braun: No, we’re still really good friends. We’re fine. It was just one of those deals where we were racing hard. I said, ‘Man, I hate it. I’m sorry.’ He said, ‘I know. We were racing hard.’ That’s part of racing. It just sucks when you’re having to race your teammate like that.