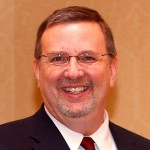 It’s Kenny Wallace, part-time Speed commentator and full-time Nationwide Series driver. He wants to talk, so of course I walk over. Never turn down a chance to listen to Kenny Wallace, for you never know what you’ll hear.

Wallace’s Jay Robinson Racing team is one of those small, underfunded teams that seem to fill the Nationwide Series these days. But take a look at the Nationwide owners standings: JRR is 19th, right behind the powerhouse Rusty Wallace Racing team and ahead of teams with more budget like Germain Racing and Phoenix Racing.

"I told my brother Rusty and (nephew) Stephen – I was teasing – I said, ‘Don’t look to the right of you. I’m next to you in the points,’" Wallace said.

Kenny’s No. 28 – sporting another new sponsor this weekend, AAA Parking – is indeed parked next to the No. 66, with its full-season, high-dollar sponsor.

"I’ve always thought 19th was bad, and I still feel that way," Kenny Wallace said. "But this is the strongest field in the last five years in the history of the Nationwide Series because Jack Roush quit the truck series and brought two full-time teams. It’s hard to stay in the top 30 now."

So how is JRR doing it?

Jay Robinson can stretch a dollar like few in the series, and Wallace stretches it even further by driving carefully.

Wallace drove that way in practice Friday, staying off the wall unlike several other drivers. Justin Allgaier’s father, Mike, notices.

"I’m proud of you," Allgaier tells Wallace. "You’re the only one that didn’t."

"You know why I didn’t hit the wall?" Wallace said. "Because I can’t."

He then barks out famous cackling laugh before waving some fans over. He stops to sign a couple autographs and pose for photos with fans as he and Allgaier talk about a race at Macon Speedway on May 31. Wallace is a co-owner of the track and wants to have a "Justin Allgaier Homecoming" event there. Justin, now a star in the Nationwide Series, got his first win at Macon a few years ago.

But the talk turns back to Wallace and his driving – or lack thereof.

Once the checkered flag is in sight, Wallace cuts it loose. The strategy has paid off, as JRR remains locked in each race because of its standing in the owners points.

"Dick Trickle once taught me you must first finish to finish first," Wallace said. "Now, I’ve already proven my ability, so it does me no good to go up there and wreck. Wrecks are my biggest gift. I can’t wreck. If I wreck, we’re ruined. I have to drive the car accordingly."

It’s not easy, and it’s certainly not the way Wallace wants to race. But he has to. The team has three cars, Wallace says, one for short tracks, one for intermediates and one "mongrel" that’s being used at Darlington.

Wallace doesn’t like that car, but his team members have told him they’ve worked on it. Still, Wallace will simply try to finish with the car in tonight’s race. And if he does, it won’t be pretty. But it will be effective.

"I think it’s time to look out for some of these Nationwide car owners and teams, give them a little bit of love," Wallace said. "I think we need to recognize my team."