Trevor Bayne is OK after No. 99 Toyota catches fire at Daytona

Share All sharing options for: Trevor Bayne is OK after No. 99 Toyota catches fire at Daytona 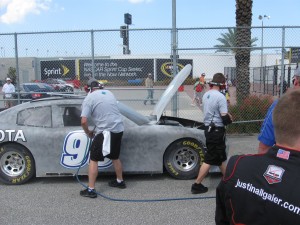 Apparently, the carburetor had just been changed on the engine. Flames engulfed the front of the car and through the firewall, but Bayne was able to escape unharmed.

"I smelled fuel on the backstretch when I was making my run there, and we were about to come in, so I just came down pit road, got to the frontstretch and went to turn into the pits - and it blew through the firewall," Bayne said. "We had just done a little carburetor changed up there, so I don't know if the fuel line worked its way loose up to that change or what, but it just blew through, and it was a big fire."

Several Nationwide Series drivers came down to look at the car after the fire was extinguished.