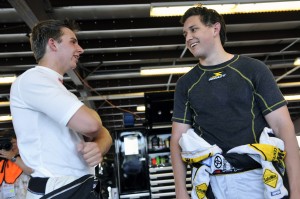 But both young drivers faced down that pressure and turned in top-10 performances. Coleman, driving the No. 18 Toyota that had won the previous two Nationwide races with Kyle Busch, finished a solid sixth, while DiBenedetto finished 10th.

The Nashville race marked the first Nationwide Series starts of the season for Coleman, 22, and DiBenedetto, 18.

Coleman last raced in the Nationwide Series at Montreal last August when he drove JGR’s No. 20 Toyota. He was reunited with crew chief Jason Ratcliff in the No. 18 Toyota at Nashville.

"It was an eventful night," Coleman said. "Our car is not clean. I went three-wide with the 66 (of Steve Wallace), but he decided that he wanted to be two-wide. I had a blast. It felt really good to get in the mix of things and run top-five, top-10 all night.

"Made a boo-boo because it was my first race in 10 months – I tried stopping in the 20 pit because that’s where I was last year. Luckily, it was two behind it.

"What a great night for the Safeway Driving Camry. I just have to get used to driving it looser. I’m so thrilled. I really wish we would have had that top-five. I worked my butt off to get it. I was working so hard. I told the guys, we were in a similar situation at Iowa last year. I got under somebody for 10 laps and finally I decided I was going to drive it in there and beat them and I wrecked us both. I wasn’t going to do that. Sixth is way better than being on the truck."

DiBenedetto was driving his second Nationwide race and his first on a track bigger than a mile.

"The best thing I could do is bring the car back in one piece to the shop and that is the more impressive thing. I learned a lot and will apply it to my next outing. I’m sure if Joey (Logano) was in the car, he could have gone faster, but I was learning a lot. I’m pretty happy with our day, the pit crew and it was great working with my crew chief, Kevin Kidd, they all did a good job."